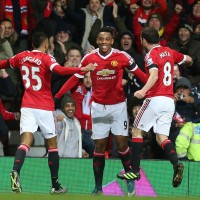 Attacking football made a rare appearance at Old Trafford on Tuesday night, as Manchester United swept aside Stoke City, scoring three goals at home for the second consecutive game but only for the first time at home since they beat Sunderland by the same scoreline in September.

United carried on where they had left off at Derby, starting the game on the front foot and never allowed Stoke to settle, inspired by some wonderful individual performances from Anthony Martial and Wayne Rooney, who both got on the scoresheet, and Juan Mata.

Having served up depressingly dull and dire football for the majority of the season, on Tuesday night United finally delivered the kind free-flowing football supporters have craved since Louis Van Gaal arrived at Old Trafford 18 months ago.

After failing to score a first half goal at Old Trafford in 11 attempts this season, United netted twice within the first half an hour, the first time they scored twice in the first 45 minutes of a Premier League game on home turf since they beat Manchester City 4-2 last season.

Welcome though they were, the goals only told part of the story, for United attacked with a verve and enterprise rarely seen this season, passing the ball with fluidity and moving into the right spaces at the right time.

Earlier on Tuesday, Anthony Martial admitted he’s not driven on by the prospect of personal accolades and that the team comes before any individual records. Imagine what would happen then, if the Frenchman was to become a little more selfish in front of goal over the next couple of seasons.

The 20-year-old looked unplayable against Stoke, even more so than he had done against Derby in the FA Cup on Friday, repeatedly taking his man on and injecting some much-needed pace into United’s attack. 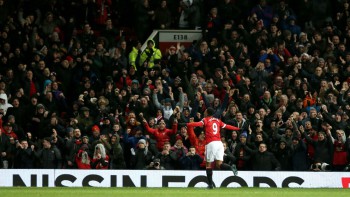 In the last two games Martial has justified Van Gaal’s decision to deploy him as a left-winger rather than as a traditional centre-forward, for the Frenchman’s pace makes him impossible to handle when United play the sort of quick football they displayed on Tuesday, which opens gaps for him to run into.

Martial’s wonderful curled finish to put his side 2-0 up was arguably United’s best goal of the season particularly as it capped a wonderful attacking move, but his assist for Rooney’s goal was just as brilliant.

On Boxing Day, as United traveled to the Britannia to face Tuesday night’s opponents, Wayne Rooney was left out of the starting XI after a series of dismal performances. It looked to be the beginning of the end for the United captain, instead it might just be turning out to be the pivotal moment in his season as Rooney has slowly rediscovered his form ever since.

The 30-year-old might no longer reach the heights of yesteryear but he’s scored seven goals in the last seven games in all competitions and looks a happier, hungrier player that the one who staggered around the pitch in the first half of the season.

Having Martial and Lingard out wide to provide pace and stretch Stoke’s defence allowed Mata and Rooney more time on the ball and one can only hope Van Gaal will not revert to type in the future. 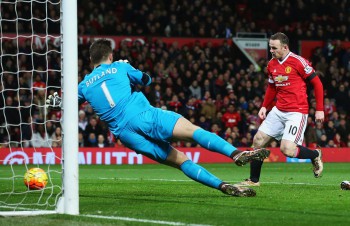 United’s full-backs have suffered all sort of injuries this season, from Luke Shaw’s horrific broken leg, to a catalogue of fitness issues that have plagued Ashley Young, Matteo Darmian and Antonio Valencia.

However, amid all the doom and gloom, United look to have found a full-back for the future in Cameron Borthwick-Jackson, who was again very impressive at both ends of the pitch, as he delivered the assist for United’s opener and looked assured in his defensive third.

The youngster might have been handed his chance out of necessity rather than choice, but he’s seized it brilliantly so far and could develop into a fine player.

5) Will the real United please stand up?

Despite the criticism, despite the horrendously dire football and despite all the off pitch distractions, United are still within touching distance of a top four finish, which somewhat disappointingly has become their most realistic target for the season. 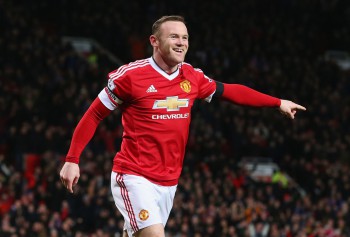 Should United play the way they did against Stoke, few would bet against them putting together a winning run, particularly in this most unpredictable of seasons, where Arsenal, everyone’s favourites until a couple of weeks ago, have now fallen to fourth, just five points clear of Van Gaal’s side.

However, United’s main problem this season has been an appalling lack of consistency, for they’ve never managed to generate momentum. Chelsea away on Sunday would be the perfect occasion to address that issue.