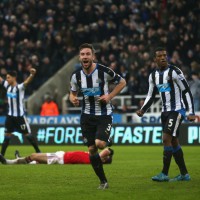 Manchester United scored three goals for the first time since 17 October but returned from Newcastle with just one point after conceding a late equaliser.

Having gone two up within 40 minutes, United surrendered their lead yet again before a Wayne Rooney wondergoal fuelled hopes of a second consecutive league win, only for Paul Dummett’s superb strike to deny them three points.

Against Chelsea, in his first game since being dropped for the trip to Stoke on Boxing Day, Wayne Rooney looked a player completely bereft of confidence and form, as he justified Louis Van Gaal’s decision to leave him out of the starting XI at the Britannia.

Since then, however, the Manchester United captain has scored in three consecutive games and while he still looks a paltry imitation of his former self, his contribution has somewhat improved.

Rooney’s assist for Lingard’s goal and his wonderful finish to give United short-lived 3-2 lead was a reminder that the 30-year-old can still offer more than just a reliable option from the penalty spot.

The question is: Was this one a nostalgic look to the player he once was or another step towards regaining form? Sunday’s trip to Anfield, a venue where he’s seldom performed, could clarify a few doubts. 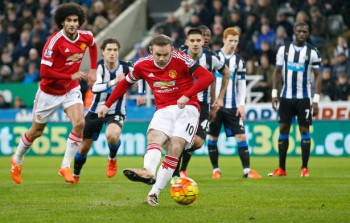 2) Fellaini is the villain again

In Louis Van Gaal’s first season, Marouane Fellaini was arguably one of the success stories at Manchester United, as the Belgian international went from being pantomime villain to be an important member of the starting XI.

This season, however, the former Everton man looks like the player that epitomised David Moyes’ failures during the Scotsman’s nine-month spell at Old Trafford. Cumbersome without the ball and guilty of giving away possession too easily, Fellaini was responsible for Newcastle’s first goal after losing the ball in midfield and then cushioning it into the path of Georginio Wijnaldum. 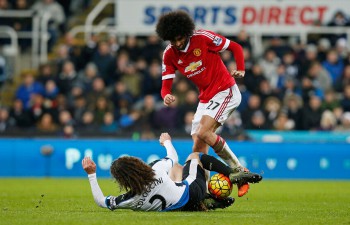 More worryingly, the Belgian offered absolutely no threat in the air, a speciality which is supposedly his forte, and was lucky to get himself sent off for a number of completely unnecessary challenges and United paid his miss late in the second half very dearly.

Van Gaal’s options might have been limited by injuries to Bastian Schweinsteiger and Michael Carrick, but deploying Fellaini as central midfielder, particularly in this kind of form, is a recipe for disaster.

3) Lack of leadership all too evident

For all the criticism aimed at Van Gaal’s style of football and his tactical choices, even when they play reasonably well United are hampered by a severe lack of leadership, which means they can never navigate through difficult moments unscathed.

Having conceded a goal just before halftime, United needlessly gave away a penalty in the second 45 minutes and looked on the ropes for a brief spell after Newcastle’s equaliser, as the sat back too deep and invited pressure. 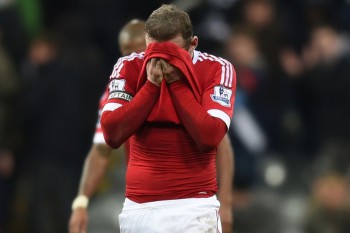 Rooney’s goal should have given United all three points but, again, they could not defend a lead. Away from entertaining football, the difference between great teams and mediocre sides boils to the ability of closing games down.

Not only does this United side lack leadership, it also lacks the killer instinct that would turn draws into wins, which was abundantly highlighted by two costly misses.

Jesse Lingard squandered a glorious chance to make it 3-1 as he blazed over from close range, while Fellaini could only head straight at the keeper from point blank range soon after Rooney had put United back in front.

Had either chance gone in, United would have walked away from St James’ Park with three points. Instead, they were punished by Newcastle in both instances and succeeded in the difficult feat of making a team that will probably be involved into a relegation scrap look like a decent side.

5) Van Gaal can’t get a balanced side

Van Gaal’s philosophy has delivered mind-numbingly dire football this season but, at least in the first half of the campaign, it also yielded results and some sort of defensive stability.

Unfortunately, however, results and defensive stability have gone out of the window when the shackles have been even slightly released, which has in turn led to horror shows like in the games against Wolfsburg and Newcastle. 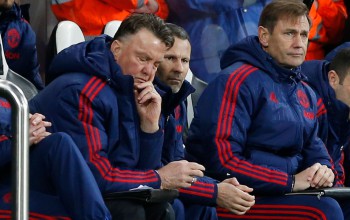 Entertaining though they might be, both games saw United surrendered crucial leads as their back four plunged in utter chaos.

They have, of course, been here before over the last 18 months – Leicester away last season being a perfect case in point – but it doesn’t make it any less infuriating and it is absurd that such an expensive side could only function at one end of the pitch.