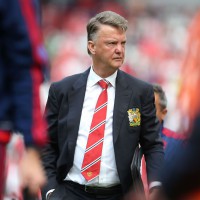 Manchester United’s winning start to the season came to an abrupt end on Saturday, as Louis Van Gaal’s men slumped to disappointing 0-0 draw against Newcastle.

Having started with purpose and intensity, United soon faded away as they were hampered by the now all too familiar anaemic strike-force, even though Wayne Rooney had a goal ruled out for offside.

1) United need to buy a striker

Manchester United have scored two goals in three Premier League games this season and, regardless of what Louis Van Gaal might think, they’re in desperate need of a world class striker. In his post-match interview, the United manager insisted bolstering his options up-front wasn’t a priority, but numbers suggest otherwise.

Against Spurs and Villa, the lack of goals was blamed on United’s inability to create any clear cut chances, but against Newcastle the Reds registered eight shots on target and another 12 that didn’t trouble Tim Krul.

In fact, they accumulated more shots on goal in the first 20 minutes than they had done in the previous 180.

The lack of fluidity and confidence that is hampering United in the final third of the pitch is unlikely to improve as the season goes on, even though Van Gaal seems convinced of the opposite.

However, with just over two weeks left in the transfer window, even if the Dutchman was to change his mind, would he have enough time to secure a world class striker?

Bastian Schweinsteiger had impressed when coming on against Spurs, Villa and Club Brugge. While Van Gaal maintained the German wasn’t fully fit, the former Bayern man made his presence felt in his first three appearances of the season and with Michael Carrick struggling for form, starting Schweinsteiger against Newcastle seemed the logic thing to do.

However, the 31-year-old failed to impress on Saturday, looking leggy and offering very little in possession in the 60 minutes he spent on the pitch before he was replaced by Carrick. The German is clearly not fully fit yet, therefore he might find easier to influence games when facing tiring opponents, rather than when he’s picked in the starting XI.

United and Van Gaal will need him to fire on all cylinders soon, though. 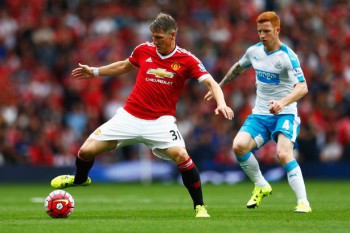 For a side still short of a world-class centre-back, United have been extremely solid defensively so far and their clean sheet against Newcastle was the first time since the 2005-06 season they’ve gone the first three games of the campaign without conceding.

Chris Smalling looked again composed at centre-back, while Daley Blind continues to epitomise the kind of intelligent footballer Van Gaal loves to be able to rely upon, if it means deploying the former Ajax man out of position.

However, Newcastle hit the bar and wasted a glorious counter-attack late on in the game when they could have, and should have, made United pay. Better teams are unlikely to pass on such glorious opportunities and mounting a title challenge on a series of 1-0 wins seems a rather unlikely prospect.

Earlier this week, the United captain admitted he had not played well so far this season but lambasted those who criticise him after “one bad game”. If his performance against Newcastle was anything to go by, Rooney might want to avoid newspapers for a while as the critics are unlikely to go away anytime soon.

Rooney was unlucky to have a goal marginally ruled out for offside but was largely anonymous throughout the game, with his decision to address the referee as a “f***ing s**t c**t” his biggest  contribution in the second half. 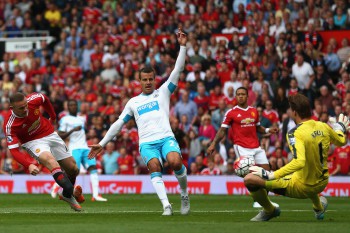 The feeling is that Rooney is letting frustration get the better of him, as he tends to drop too deep in search for the ball, drifting away from goal way too often.

This not only deprives United of a presence in the box, at times Rooney operated deeper than Juan Mata and Adnan Januzaj yesterday, but makes the United number 10 even more frustrated. The lack of options up-front is the only reason as to why Rooney is unlikely to be dropped this season.

United might not have impressed so far this season, in fact – apart from their six-game winning streak last spring – they have not done so in a couple of seasons. That, however, does not grant fans the right to boo the team and not only because United have won two or their first three games and have suffered much worse starts to their campaign.

Football is changed, United have changed and the days of playing football the way the club did under Sir Alex Ferguson might be gone forever. Some will accept that, others won’t, but booing is the kind of behaviour we should leave to other clubs.