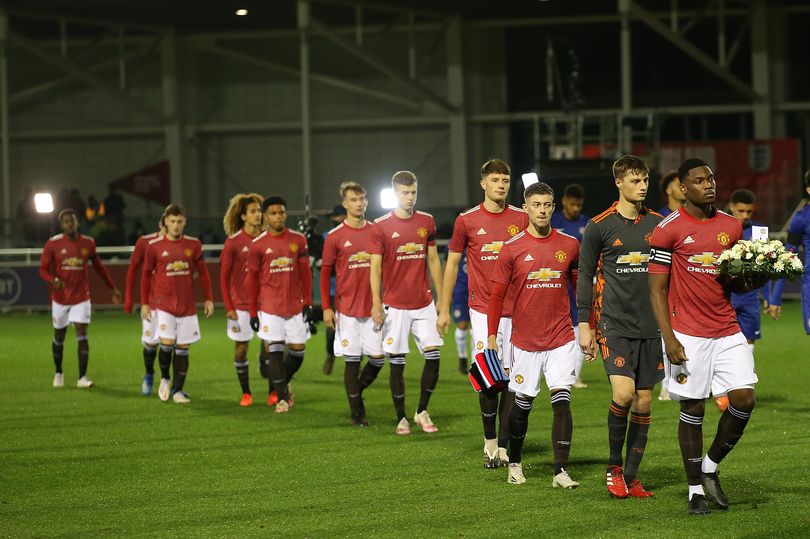 Manchester United and Chelsea went head-to-head at St George’s Park on a Friday night spectacle that would earn the winner a secured berth in the final of the FA Youth Cup.

Manchester City had won the earlier game of the day against Blackburn Rovers, and hence already obtained a place in the grand finale.

And now, it was the time for the decider as to whom the youth Cityzens would lock horns with on Monday night.

Players from both sides performed the heart-warming gesture by remaining silent for one minute, owing to the sudden diminish of England and Manchester United legend Nobby Stiles earlier that day.

And then the referee blew the whistle.

The players, in no hurry, took the knee in the support of the ongoing ‘Black Lives Matter’ movement at first. Thereafter, they stood up and initiated the game.

In a game that saw United playing under the shadows of Chelsea Football club for the majority of the regulated ninety-minutes, some might argue that the final scoreline was not justifiable at all.

Here, we have three talking points as United endured a narrow 0-1 defeat at the hands of their London rivals at Staffordshire.

Chelsea’s U18s, known for their pressing and counter-pressing traits, were spot on with their gameplan against Manchester United last night. United’s general intent was to orchestrate their build-up play from the back.

However, Chelsea, on the other hand, were quick to react and close United players down while off the possession.

Chelsea’s high pressing forced United to commit some miss passes and give possession to the opponents very cheaply. Therefore, Chelsea were able to create more than enough chances from United’s mistakes.

Yet, the Blues were not crisp with their final act as their manager saw his young brigade missing one after another jaw-dropping opportunity of drawing the first blood during the initial stage of the game.

Chelsea’s counter-press was one of the major reasons why Manchester United looked stale in what was a chilly night in the West Midlands of England.

As mentioned in our pre-match piece, United, despite signing several new names from the bygone summer transfer window, were unable to field them in the FA Cup tie against Chelsea as the new members were not registered to play for United in the 2019-20 season.

Although it was not a performance we had expected form the trio, Hannibal Mejbri and Teden Mengi, in particular, were appalling with their duties on the field.

While Elanga hit the bar with an acrobatic effort after what was some nice combination play between him and Shoretire, Mejbri received his 10 yellow cards in 25 games since he joined Manchester United on Friday night.

There were certainly moments of emergence from this crop of United Under18s, but their intention never looked promising going forward.

#1 Chelsea were the deserving winner

From the very opening minutes of the match to the very final peep on referee’s whistle, Chelsea looked dominant and more composed on the ball. They outplayed Manchester United in every aspect.

Chelsea were more adamant to progress down the wing, as shown by Chelsea’s first goal. Livramento, a threat for United’s youth defenders all night long, produced a sublime cross into the box.

Bryan Fiabema took the chance and broke the deadlock. Chelsea were the first to hit the bar and brought the best out of United’s keeper Ondrej Mastny.

Chelsea, the winner of nine FA Youth Cups, will now be facing another strong contender in Manchester City to extend their tally to ten on Monday night.