Every single one of us loves Alex Ferguson 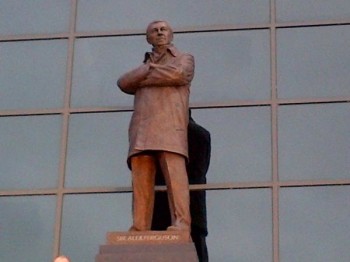 Sir Alex Ferguson further cemented his legacy at Manchester United as the club honoured the Sir Alex by unveiling a statue outside Old Trafford earlier this afternoon.

The statue, unveiled by Sir Alex’s wife Cathy, was described by David Gill as “the next piece in the jigsaw” to honour Fergie’s 25 years in charge of the club following the renaming of the North Stand to Sir Alex Ferguson Stand last year, was unveiled in front of the current team and many former United greats including Eric Cantona, Andy Cole, Bryan Robson, Phil and Gary Neville,Edwin Van der Sar Denis Irwin, Ole Gunnar Solskjaer, Peter Schmeichel and Ruud Van Nistelrooy.

Fans lined up outside Old Trafford, where heavens punctually opened in typical Mancunian fashion, to honour the man who picked up Sir Matt Busby’s baton and forged the club into what it is today, who received video messages from David Beckham and Cristiano Ronaldo.

In recent years, here at Red Rants we have occasionally questioned some of Fergie’s decisions – after all, that’s what an opinionated blog is all about – but today we decided to leave our personal views aside and honour perhaps the greatest manager football has ever seen.

Manchester United have always been a family club (forget about the corporate crap we’re fed these days), and every family need a father figure. Over the years we have come to take Fergie for granted but, in the future, we will all look back reflecting on how blessed we have been to witness his reign. In his 26 years at the club, Sir Alex has changed the club  and few have represented Manchester United and the values of our club as Fergie has done over the years.

Thanks for everything, Sir Alex.

Rio out, Rodriguez in?
From liability to re-liability, Fergie’s winning Raf-fle ticket