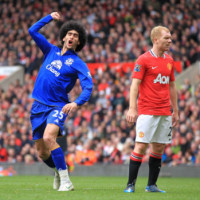 With a trip to Real Madrid looming in midweek I hear people suggesting Everton at home on Sunday afternoon is hardly the ideal preparation and that United would’ve wished for a different fixture.

In my opinion it’s the ideal fixture, it concentrates the mind, releases the players thoughts from wandering to Wednesday thus not allowing any complacency to creep in. Imagine a visit from Reading or Fulham? Imagine the temptation to field a weakened team against one of those? It’s happened before and we’ve come unstuck (I’m thinking back to Bolton at home two seasons running). There’s no doubt Sir Alex will make a few changes but, after what happened last season, he and his troops will surely be looking for some semblance of revenge and strengthening their ever increasing grip on the league title.

With Betegy giving Everton a calculated 36% chance of scoring on Sunday, United may well need to continue their impressive scoring to out-do a physical Everton side determined to challenge for a top four spotcome the end of the season.

In his press conference yesterday, Sir Alex explained how he will be making full use of his squad over the next two games.

“It will be different teams,” he said. “The team on Sunday will not be the same as the team that plays on Wednesday”.

“I trust the squad of players I have. They are all internationals, they are all good players and there is no reason why I can’t play them”.

“They’re all contributing in their own way and that gives us a better chance of dealing with the various competitions we’re in.”

Last week my (predicted) selection included RvP and Rooney up top in a bid to get them firing TOGETHER and I predicted Sir Alex would use that game AND this Sunday’s to get the pair ready for Madrid on Wednesday. I’m sticking by that prediction and expect to see them lineup for both despite what Sir Alex said.

In the previous five meetings between the two sides, home and away, there’s been two high scoring draws (3-3 & 4-4) while the remaining three were all 1-0 wins (two to United and one to Everton on the opening day of this season). Which bracket will Sunday’s game fit into to? 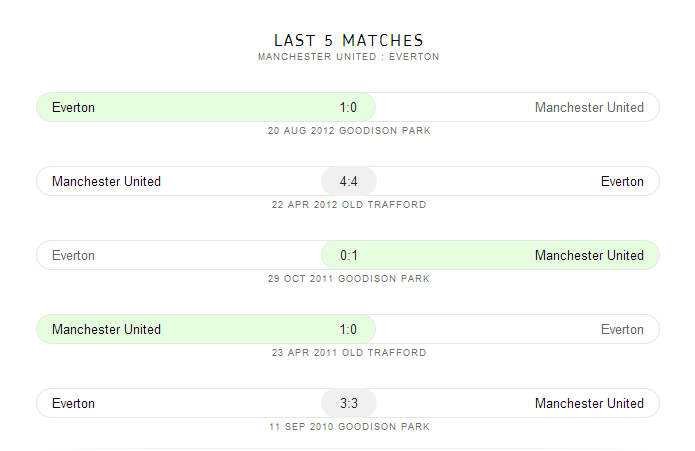 I guess the question is…..who does Sir Alex want in both teams and who can play two games in four days. 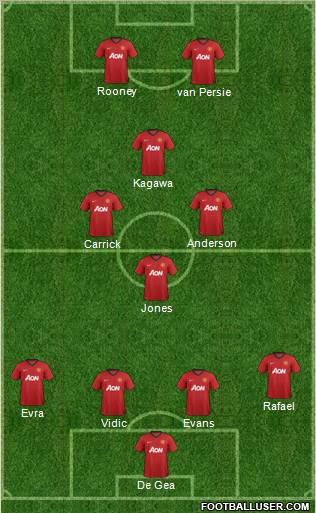 When that’s whittled down I reckon De Gea, Vidic, Evra, Carrick, RvP and Rooney start both. Cleverley and Rafael are close as is Valencia, other than that the likes of Anderson, Ferdinand, Evans, Smalling, Welbeck, Hernandez, Kagawa, Young and Giggs will be the players utilised to get two positive results. According to reports this week, Phil Jones was suffering from shingles and looking at a few weeks out. He has however been passed fit, this tells me Sir Alex fancies his presence on Sunday to do a job on Fellaini or Baines (either in CM or RB).

Everton could be without Phil Jagielka and their star man Marouane Fellaini, if they are that has to be a relief given the damage Fellaini did to us back in May and August 2012.

I can’t see past United getting the points and a bit of payback on Sunday, should be a great match with battles all over the park. Fingers crossed each player involved comes out unscathed and ready for Wednesday.

Anyone care to predict a lineup or a score? I’m going with United 2-1. Goals from RvP and Rooney but a MotM performance from Jones doing all the scruffy stuff.

If you’re going to the game, look out for The Stretford End Busby Babes surfer flag that’s being unveiled as the teams line up in the tunnel shortly before kick off.

The design of the surfer flag was chosen by Gary Neville who stated that the image of the Busby Babes last ever line up is used by Manchester United in the home dressing room to inspire and motivate the players. We hope this flag will inspire and motivate not only the players, but the Old Trafford crowd as it makes its way over the Stretford End lower for all our home games.

For the Everton game, the flag will be laid out at the players tunnel side of the Stretford End and it will surf across the stand before being retrieved by stewards when it gets to the corner quadrant. Please conform with the stewards when they ask for it to be put away.

We envisage that the flag will remain out during the teams pre-match handshake. 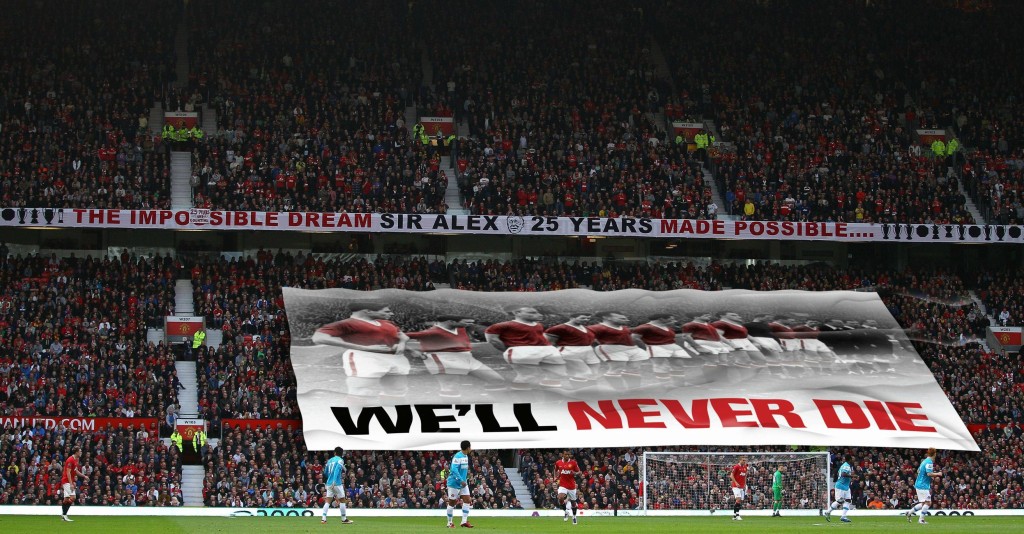 The funding for this giant flag has come from Stretford End Flags (SEF), Gary Neville and Manchester United. In order to provide our part of the funding, we have collected fans donations towards this flag. We have a target figure of £2,000 that we need to raise and to date we have collected £1,300. Fans can make a donation via the information on our donation page or by sending a paypal payment to stretfordendflags@hotmail.com a totaliser on our website shows the ammount colected to date http://www.stretfordendflags.com

Can United extend the gap at the top to 10 points?
Manchester Derby: Chance for United to show their quality