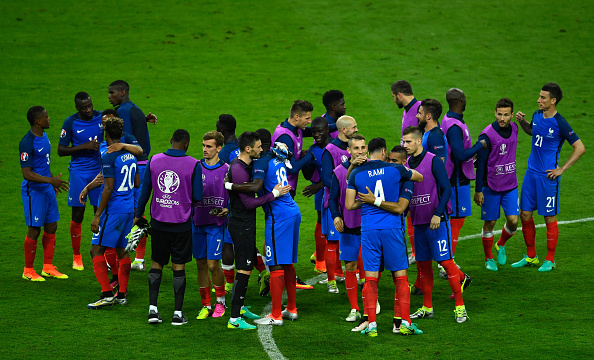 The second round of group games at Euro 2016 starts on Wednesday with hosts France taking on Albania at the Stade Vélodrome in Marseille in the evening kickoff.

Didier Deschamps’ side would qualify for the second round with victory and put themselves one step closer to winning the group after starting with a 2-1 win over Romania on Friday. France are odds on favourites to beat Albania -Albania lost their opener 1-0 against Switzerland in which captain Lorik Cana was sent off and subsequently sent off – a huge blow to their chances of getting anything out of this game.

Eyes will be on United target Paul Pogba who showed a lot of quality in the first match but was outshone by West Ham’s Dimitri Payet who looked to create a lot of chances before scoring the late winner himself.

Anthony Martial only got quarter-of-an-hour versus Romania down the left wing but still managed to test the opposition goalkeeper in that time.  The youngster is competing with Dimitri Payet for a starting place down the left wing but if Olivier Giroud continues to be wasteful as he was on Friday then there’s potential for him to go up front.  Alternatively, he’s a different option to the Arsenal striker during a game.

The other United player in the French squad, Morgan Schneiderlin, didn’t get on the field at the Stade de France and is unlikely to do so in any competitive match given that Paul Pogba, N’Golo Kante and Blaise Matuidi are the central three in France’s 4-3-3 formation.  Squad rotation this early in the competition isn’t out of the question though as the French will be expecting a comfortable win versus Albania and perhaps a much tougher match up versus Switzerland to win the group in their final game.  I think Schneiderlin will get game time in this tournament as the central three may need a breather at some point, and they may also pick up a yellow card early in the game that could see Deschamps play safe and not risk them for the full 90.

Another United target, Kingsley Coman also got a second half run out in their opening game, replacing Antoine Griezmann midway through the second half.  Currently with Bayern Munich, we can expect to see more of the 20-year-old in this competition after being an impact player with the German side this summer. 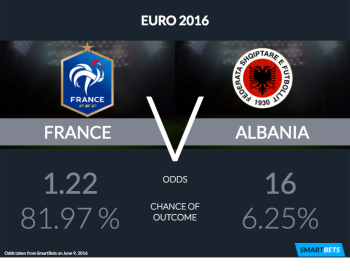 The hosts didn’t pick up any injuries in their first game and Olivier Giroud was the only player to pick up a yellow card.  If the Arsenal striker picks up another on Wednesday he would miss the final group game versus Switzerland.  That game is on Sunday so it’s not out of the question that Didier Deschamps changes his side to keep them fresh for their final group encounter.  The Swiss took three points from their opening game versus Albania but certainly aren’t guaranteed to beat Romania in their second game based on the performances of both sides in their first game.

Captain Lorik Cana was sent off in the first match so Albania will need to make a change at centre-back.  Former-Manchester United youngster Freddie Veseli could replace him.

61% – France had 61% of the possession in their opening group game.