Euro 2012 is only a week away and when the continental tournament kicks off in Poland and Ukraine next Friday, United fans will have a very small contingent of players to look at, the smallest in a big tournament in recent years.

England face a tough task in a group including one the host nations (Ukraine), a country against whom England have a terrible record (Sweden) and a team whose golden generation, unlike England’s, delivered results and whose young guns promise to be a stern test for Roy Hodgson’s team as the betting for Euro 2012 suggests.

With Wayne Rooney suspended for the first two games, Danny Welbeck could secure a place up-front if Hodgson decided to play his favourite 4-4-2 formation, but Welbeck has struggled for fitness towards the end of the season, missing the last two games.

Ashley Young’s first season at Old Trafford was overall a positive one, albeit marred by the occasional controversy, and the former Villa man seemed to translate his good form onto the international stage, as he netted the winner for England against Norway a week ago.

Phil Jones could be deployed as right-back or as surprise choice in midfield but Hodgson’s preference for a four-man midfield means that the former Rovers man is likely to spend his first big tournament on the bench as Glen Johnson looks to have secured his spot at full-back despite his poor season for Liverpool.

Jones suffered of a dip in form following a blistering start to the campaign, however after his first season at the club in which the youngster showed huge potential, a trip to Poland and Ukraine is fully deserved.

With Chris Smalling injured and Rio Ferdinand and Michael Carrick inexplicably omitted from the team, United’s only other presence in group D is Patrice Evra who will hope to put a disappointing season behind him by helping France to progress as far as possible in the tournament.

The Manchester United captain hasn’t had the best of seasons, as he proved time and again that while he hasn’t lost his attacking instinct, his defensive form is a shadow of what it used to be. 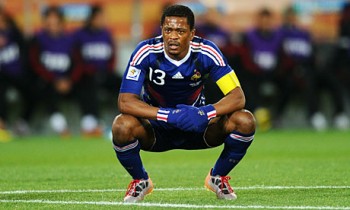 Away from group D, United’s only other contributions to the tournament are Nani, who will pair up with the man whose footsteps United fans wish he will one day emulate, and Anders Lindegaard as Portugal and Denmark face each other in group B.

Ronaldo and Nani are the two main attacking threats of a Portugal side who, like England, have shaken off their “golden generation” tag and will look to cause a few surprise during the tournament.

To do so, they’ll have to get out of the “group of death” which also includes Germany and Holland and promises to be a fascinating tale as it looks to be the more evenly poised of the four groups.

Denmark, at least on paper, are the weakest of the four teams but are experts at causing shocks even though today’s team is only a paltry image of the wonderful side that conquered Europe 20 years ago.

Lindegaard’s season was overall positive, despite an injury and David DeGea’s emergence as number one choice between and the Danish will battle it out with Thomas Sorensen and Kasper Schmeichel to earn a spot in the starting XI.
Best of luck to our players as they’ll keep the Red flag flying across Europe.

If you want to place a bet on Euro 2012, William Hill are offering 66/1 on Ashley Young for Top Goalscorer, at that price I think he’s worth a tenner of anyone’s money.

The Dream Team
You don’t have to be great to be a Fans Favourite, but it helps.