Doubt is temporary, class is permanent (except Wayne Rooney’s). 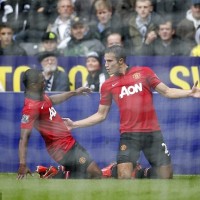 OK, one down and 37 to go. So what have we learned from United’s first match of the season, first victory as well as first regular season match under new manger David Moyes?

First off let me congratulate David Moyes on his first victory. I have to say this, even though Dave was never my choice for manager of this prestigious club, I am one of those out there who is very happy for him and delighted with a tough road win that hopefully filled us all with some optimism while answering some immediate questions.

I like Moyes, I always have. The man is class and he is the kind of individual you want to cheer for and wish the best for. With that being said I am still very concerned over the overall depth and quality of this club. Going in to the season we have had nothing but uncertainty, frustration and turmoil run roughshod over what should have been a positive, exciting and interesting new season. So obviously it was vital for the club’s mental health and confidence that we get off to not only a good start, but in fact a very positive one.

What I noticed from this game is energy, passion and a well-organized club, especially in their back line. Yes Evra again was caught on a few occasions playing to narrow or being out of position but overall, we were pretty tight and offered up nothing more than a few half chances. I thought our first twenty minutes was a bit rough but even if we had fielded the 1994 or 2008 sides, I think that would have happened on the road against a good side on the first match day of the season.

Swansea were stoked and were smelling blood, that is of course until Robin van Persie stuck a dagger in them with a sublime effort and superb volley. What can I say about this lad that hasn’t already been said. All the superlatives have been used. I was positively sick a year ago when it became clear Fergie was pursuing an Arsenal player and a player who I knew was good but who I felt was soft and injury prone. Not a player who could get tough when you needed it. Boy was I wrong. Robin van Persie has become the shining beacon of light on this club and by a country mile the club’s best player and leader. With no disrespect to the great Nemanja Vidic, but RVP for me should be this club’s captain due to his passion, commitment and world-class displays.

For years I have wondered who would be the heir apparent to Eric Cantona? Who had the skill, flair and overall class to even come close to comparing to the King? I originally thought Berbatov might be the man because of his flair and style but even though he did have his moments, he never really came close to comparing to Eric. Robin van Persie however, has surpassed my expectations tenfold. He is the talisman, the straw that stirs the drink and he does it all with rapier like precision while always displaying enthusiasm, pride and utter joy to be part of this great club. The opposite can be said of Mr. Wayne Rooney though. 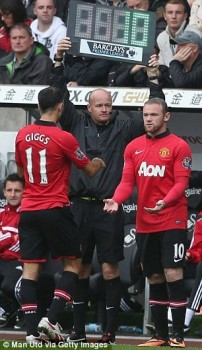 Although Wayne came on and actually showed a little work ethic while being instrumental in our third and fourth goals, I am still confused and totally disenchanted with the man’s attitude and reasons for wanting to leave the club. Just what the Hell do you want Wayne? What has to be done to make you realize that leaving this club not only hurts Manchester United but will in the long run hurt you as well? Like I said, Wayne’s strong run into position had a lot to do with giving RVP the position for his second goal. Great run Wayne but did everyone notice his lack of emotion and interest in the goal? No celebration, no show of emotion. The boy simply is not having fun and the fact is obvious, he just doesn’t want to be here. But enough about that cry baby, today is a day to celebrate victory.

Overall performance levels were high for the squad today. I don’t think Swansea were close to their overall form of last season but then again they never just sat back and parked the bus either. They are a talented side who play with some European flair and style and beating them 4-1 on the road was truly an amazing result.

Lets start with De Gea in goal. I hope he isn’t hurt too bad. Overall he never really had too much to do but he seemed very sure of himself and he also looks to be more in charge in the box. I noticed him shouting and directing players in the box, which is something he never used to do. Upset I am that he lost out on the clean sheet due to Welbeck’s dilly-dallying in the box but other than that United’s keeper was solid if not spectacular. Oh I did like the way he pounced on Michu in the box and forced him into a no win situation. That’s not just ability, that’s confidence and attitude that says I’m in charge here so piss off Michu.

Our back four were pretty decent for most of the afternoon. I mentioned earlier that Evra seemed to be his usual self at times. How many times this season will he be caught out of position or in to narrow a position to assist? Somebody needs to tell him that he is not a central defender/winger because that is the way he plays. Fortunately his defensive play never cost us any goals but I worry about this player’s worthlessness down the road.

Vidic and Ferdinand were strong although Ferdinand played that goal scored against us poorly. He left his man who ended up scoring the goal uncontested. Vidic was strong and combative and not much more can be asked of the General as I see it. I just hope both our CB’s can stay healthy. Wishful thinking I’m sure. Phil Jones was also pretty decent and I thought his defensive play in and around our box was quite strong and he was very unlucky not to score on an outstanding volley that would have made any elite striker in the world envious.

Our midfield again was a mixed back of goods. Our width was good and our movement was good but not yet excellent. I still feel however that our midfielders were playing a lot on their heels and our possession at times was not very good. Still, when it mattered Giggs delivered a strong lob chip to RVP for the first goal and Carrick was strong defensively tracking back and assisting our back four. Cleverley for me was kind of invisible.

I don’t want to get all negative on the lad but he needs to make more of a statement of intent rather than just go through the motions. Star players are not afraid to take a risk or two. Cleverley it seems has learned a lot from Scholes but mostly about being cautious and mastering the back pass. I need to see more through balls and dazzling runs with the ball from Tom. Valencia was solid and his strong trap and pass led to the second goal. He also ran his socks off even though he really never made or created that much other than the second goal, I was nevertheless encouraged with his play.

Still, I want Zaha in there and I really am bitterly disappointed that he never started the game and even more so, that he never played at all. That was a typically Fergie thing to do by Moyes and I hope this is not indicative of the future where the kids are forgotten and the old vets play all the time. Seeing Anderson show up late in the game was also something that left me feeling a bit queasy inside. I make no excuses, I do not like Anderson and I want this player gone from United. Instead, the club continues to throw him out there against my wishes until of course he goes down with a long-term injury again. 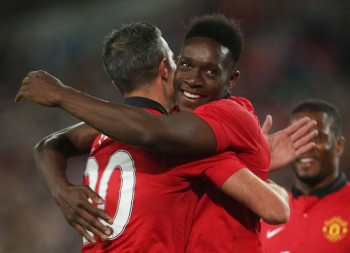 The stars of the match of course were Robin van Persie and amazingly, Danny Welbeck. Today Welbeck finally arrived. I believe he equalled in one match his total goal haul for last year. And his second goal was truly outstanding and showed confidence, imagination and the highest order of skill. His performance was very encouraging, and for now at least I am calling off the dogs. I still prefer Chicharito but Welbeck may prove me wrong and at least today and as well his match for England earlier this week, he proved to be a revelation.

I already have gone on and on about Robin van Persie. What more can I say other than his first goal was world class and his second goal was universal class. What a take and what a shot. Too bad Rooney felt so cheated by his and Danny’s success that despite being influential in both of the last two goals, he felt celebrating the goals was beneath him. I think he sent a message that was very clear to me. Nothing United say or do will change his mind and it’s clear that for the best interests of this club, we must deal Wayne Rooney and deal him now..

Ideally I would prefer us to show strength and resolve and not let player power spoil and disrupt this club’s chemistry and attitude. Right now Rooney’s attitude is a festering poison that is preparing itself to spread within the body of United. Even though sending a strong message about destroying player power is something I am all for, I do not believe in this case that keeping Wayne is in our best interests. No, we must not sell him to Chelsea or Arsenal but we must sell him so lets sell him to Real Madrid. Madrid has always wanted him and Ancelotti has always been an admirer so why not throw him in a deal that could possibly net us an Ozil and either Khedira or Modric? For me this is a no brainer and must.

Danny Welbeck proved today that we really do not need Rooney as much as Rooney thinks we need him. What we do need is a better midfield and with that better midfield I am confident that we can keep our position at the top of the Barclay’s as well as becoming a much greater threat in Europe.

Today’s 4-1 victory was first class and Robin van Persie and Danny Welbeck were world-class. A great first game for David Moyes and encouragement that United are not quite ready to relinquish their throne. A must win considering we face City and Chelsea in the next few weeks. Those matches will go much further in letting us know what we have to work with but at least for now, all things look bright and shiny. 4-1 was a serious show of intent and should make many other clubs who threaten our dominance think twice about considering us yesterday’s news. Keep the passion, pace and aggression going Dave and good things should happen.