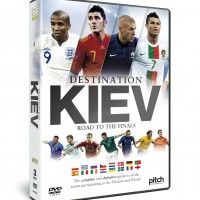 This years European Championships are set to be one the most fiercely contested finals of all time with great players and great managers gathering to provide us with an exhibition of football never to be forgotten.

Poland & Ukraine are ready and set to host the championships from the 8th June all the way to the final on Sunday 1st July.

This 3 disc box set chronicles each of the 16 teams journey to the final stages and provides you with an insight into what’s been happening behind the scenes to prepare each venue to host the event. Watch as relatively unknown cities such as Wroclaw in Southern Poland and Opalenica in the west transform into the impressive stadia they are today.

Better known cities such as Kiev in the Ukraine and Warsaw in Poland, two of the biggest cities in eastern Europe, will become a wash of noise and colour as they fill their streets and bars with expectant fans from across Europe and probably beyond.

Destination Kiev: Road to the Finals; pinpoints the key players frrm each country. Players such as Xavi, Ronaldo and Arjen Robben will strut their stuff on the biggest of European stages but there are many more world class players itching to upstage them and lead their country to glory.

Immerse yourself in 5 hours of interviews, highlights and statistics to prepare for your summer of football. There’s also a handy A3 wallchart to keep track of fixtures and venues.

We’re giving you the chance to win your own copy of the boxset courtesy of RedRants.com by answering this simple question via Twitter.

Who scored the winning goal in the 2008 European Championship Final between Germany and Spain?

Tweet your answer to @Red_Rants and be following us to find out if you’re a winner. One lucky winner will be chosen at 7pm on Monday.

Who do you think will be the stand-out players of the tournament? Which country has what it takes to go all the way a lift the coveted trophy in July? England maybe? (sniggggger) France, Spain, Italy? Or my personal choice Germany, with Ozil, Neuer, Gotze and Schweinsteiger they look a formidable squad.

Is this the best ever headed United goal?
Win 50 Classic European Matches DVD