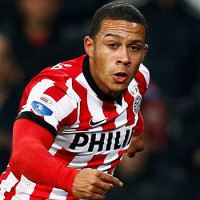 Memphis Depay has more in common with Cristiano Ronaldo than with Arjen Robben, according to Dutch expert, who claimed Depay’s physical strength and desire to win are similar to the characteristics that have seen the Real Madrid man emerge as one of the world’s best players.

Voetbal International journalist, Thijs Slegers told MUTV that the former PSV Eindhoven man is more similar to the former United number 7 than to his fellow Dutchman.

“I don’t agree with the Robben comparison as Arjen is like Peter Pan when he’s dribbling, from left to right, with samba in his hips, whereas Memphis is more about power,” he said.

“Memphis is a little bit like Cristiano; they have similar qualities, although there are of course areas where Memphis is inferior. However, his determination to be the best is where I see the real similarity with Cristiano.

“The way Memphis was brought up has given him a fearless style to his playing. He has respect for his opponents but he does not fear them.

“When there is a road, he will take it and he doesn’t take no for an answer.”

Pirlo: “Scholes is the best player I’ve ever played against”
RVP not worried about future