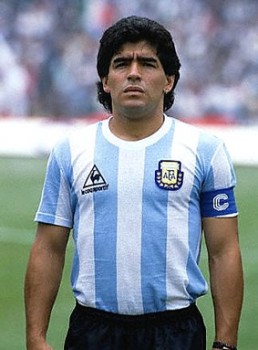 Diego Armando Maradona, arguably the greatest player to play the beautiful game but less arguably the most flawed.

The little Argentinian was a football genius, of that there can be no doubt, a man who shared legendary status in his homeland with the likes of Che Guevara and Evita, a man who was known simply as, D10S….God.

Maradona’s life story and the thoughts of many of the games most respected figures are enthrallingly compiled in a film length documentary entitled ‘D10S: The Story of Diego Armando Maradona which is now available from Amazon.

The feature length documentary is just shy of 2hrs long but in truth I would’ve been happy to sit through it for longer. At one point it’s suggested that Maradona would be even better than he was if only he were playing today thanks to the over zealous treatment he received by the likes of Italy and Uruguay who knew they could get away with stopping Maradona in his tracks whenever he received the ball. Lionel Messi doesn’t know how lucky he is!

* There is a story that the first day a young boy arrived to train with a local football team in the suburbs of Buenos Aires three people were there to watch him. By the second day there were 10. By the third day, a crowd of more than 30 had gathered to watch this diminutive boy play with the poise and skill of someone much older. His name? Diego Armando Maradona.

He would come to be known in Argentina simply as Dios God. Diego Maradona was born into an incredibly poor family and spent his childhood living in a small hut with seven brothers and sisters in the shanty town of Fiorito, in the suburbs of Buenos Aires.

His journey from abject poverty to superstardom is a staggering one, a rags to riches tale filled with joy and heartbreak in equal amounts. His career scaled unbelievable heights yet plumbed the depths. He was ever controversial, but his ability with a ball at his feet is undoubted: many would argue unsurpassed.

Genius or rebel, magician or maverick? Maradona split public opinion like no other footballer. From his rise to the top of the world to the Hand of God , 1986 World Cup glory, perhaps the greatest goal ever and his downward spiral, this is his remarkable story, told in his own words and by those who knew him best.

As a proud Englishman I know I should hate him, but as a lover of football I just can’t, there’s been no one like him before or since, not even Messi although he is the closest thing I’ve seen to Maradona in the way he plays. Zidane was brilliant, but his game was totally different to Maradona, so too was Pele’s.

If you only watch one DVD this year let it be this one, a truly enthralling story.

RedRants has secured two copies to giveaway. To be in with a chance of winning the DVD simply find us and Follow @Red_Rantson Twitter then answer the following question via our Twitter (Tweet to @Red_Rants) and we’ll pick the winners at random (entries can be made from anywhere in the World) when the competition closes at midnight on Sunday 16th September 2012.

Q: How old (in years only) was Maradona when he made his professional debut for Argentinos Juniors?