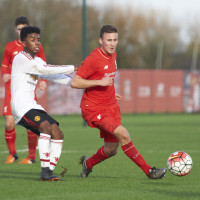 Manchester United’s academy is still producing talents who could break into the first team, according to former United defender Clayton Blackmore.
United’s youth system has come under scrutiny this season for a perceived lack of talent but Blackmore, who spoke to Stretty News’ Dale O’Donnell at a Play With a Legend Event last week, added United fans should be get very excited about Angel Gomes, who could soon break into the first team.

The publication of this interview’s extract has been authorised by Stretty News, to read the interview in its entirety click here.

This article has since been amended, as the original headline was misleading. We apologise to Clayton for the misuse of his quotes and categorically state that Clayton did not claim Manchester United lacked world class coaches.

A lot of people say the academy is not what it used to be and you worked for some time with the youngsters there. Why is it maybe not what it was and are you concerned?

“I’ve got some people in charge and they’re trying to put things right. For me coaches have not been the best. We’re bringing players through and that’s what you want. At every age group we seem to be bringing one or two players through. I mean, if you look at all the other clubs there are not many players getting through but we actually are at every age group.
Is there one player coming through that you recommend?
“There is a lad coming through called Angel Gomes, who could play tomorrow. I think he’s that good. He’s got an old head on his shoulders as well. He’s good enough to be in the first team now but it’s going to take him a year or two before everybody trusts him. A lot could happen in those two years, so hopefully he’s going to be still there and play for the first team soon.
Is there one overriding factor when you think about what has gone wrong at United this season?
“I think it’s very difficult. We’ve got Rooney up front on his own and I think you need to start with two up front. All United teams in the past have always had two strikers and a couple of wide players, which pretty much means you’ve got four up front. And that stretches their defence making it very difficult for the team you’re playing against. You get bigger gaps up front, so when you do attack the players are already in that position.
“When you play one up front, you need the midfielders to get up there and they’re having to do a bit of running before we get into those positions.
Is Louis van Gaal the right man? Is it Ryan Giggs next or what do you think?
“He’s [Louis van Gaal] the manager. It wouldn’t surprise me if he’s there next year until the end of the season. I mean, I’d love to see Ryan [Giggs] get a chance.
“I know Louis mentioned during a dinner for Ryan Giggs and said ‘he will takeover from me’ once Van Gaal is finished. So, hopefully Ryan will get that chance because he’s given 25-years to the club and they were quality years. We would have won a lot less things if Ryan wasn’t at the club. The club owe it to Ryan to give him a chance. If he doesn’t do it now he problem won’t do it then.
Bryan Robson took you to Middlesborough after over a decade at United. What was his management style like?
“First season with Bryan, I think he took a bit of Ron Atkinson and Sir Alex. Obviously there was a lot of himself in there and I thought he was really good. He was one of the best managers I played under.
“We probably spoke a lot about a few things and I think we really take those things into consideration a few years later. We then suffered. We didn’t make the changes we should have done and that’s why I think we ended up being promoted and relegated quite a few times, but I thought he was a fantastic manager.
“It’s a shame he never really got the chance to takeover at United. He deserved a chance to takeover United and I think he would have been perfect for it with the right number two.
Dreamt of playing football with your childhood hero? Well, now you can!  Play with a Legend, brings together football fans and their idols for a memorable football game and a post match pint where you can hear tales from the dressing room. It’s perfect for a stag, birthday, corporate or charity event and with over 80 former professionals involved, there’s sure to be someone you’d like to play alongside.
Related TopicsRedRants Feature