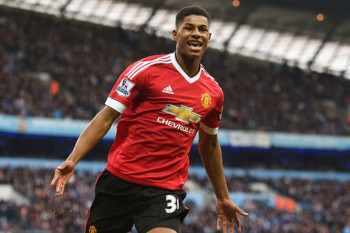 The former France international was instrumental during his time at the north London club and was also impressive for his national side. Butt believes the 18-year-old new Red Devils star can go on to develop to become as good as the ex-Gunners star.

Rashford was given a first team debut by Louis van Gaal earlier in February. He impressed as he finished the previous season on a high, which saw him being included in England’s squad for the European championship. Despite the Three Lions’ disappointing performance in France, the teenager was one of the few bright spots in the tournament.

“Yes. Blistering pace. When Marcus runs at you, you can’t stop him,” Butt told The Times, when he was aksed if he would compare his style to that of Henry.

Butt also went on to suggest that Rashford started out on the wide left and believes he can excel in that position under the guidance of Jose Mourinho at Old Trafford.

“He wasn’t a centre forward as a youngster; he probably developed into that more out of necessity last season than design. He actually was on the left. I believe his best position is off the side,” the former United midfielder explained.

“Until he gets his physicality about him he’s going to find it very hard to play up against some of these centre-halves. It depends how the manager [Jose Mourinho] is going to play; if he plays a Michael Carrick, who can clip balls in for Marcus to run on to, then it’s all different, he can run in behind all day.”