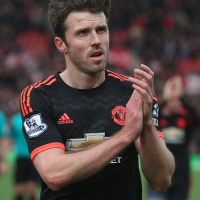 Manchester United have not given up the fight to clinch a top four finish this season, despite being six points adrift of fourth-placed Manchester City, said Michael Carrick.

United dropped two points away at Stamford Bridge on Sunday when they conceded a late equaliser, meaning they’re now six points behind Manuel Pellegrini’s men, which still have to welcome United at the Etihad, and with a largely inferior goal difference.

However, the former Spurs midfielder insisted United could still embark on a winning run and earn themselves a Champions League spot for next season.

“There is plenty to play for this month and, of course, plenty of points to play for in the league,” said Carrick.

“We’re not giving anything up just yet. We have to battle on though, keep going and play something like we have been doing over the last few weeks and then see where that takes us.

“I think it was a big day for us [on Sunday] in terms of the league situation. If we’d have gone there and got a win we’d have been in good shape, but it wasn’t to be and it makes things harder for us.

“It’s hard to take, losing two points so late on. I know we were under pressure for the last 10 or 15 minutes, but to lose a goal like that is disappointing and that’s the overall feeling.”

The United midfielder added he believed United were slowly rediscovering their form after a difficult couple of months.

“I thought we played well and produced some really good football,” he said. “We looked dangerous going forward and defended well for most of the game.

“We just didn’t do the right things at the right time near the end and see the game out.”