Can United extend the gap at the top to 10 points? 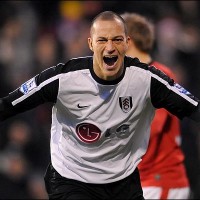 We’ve been beaten there before. We’ve made complacent errors away from home at crucial stages of a few seasons. This season it’s obvious that everyone connected with Manchester United learned a huge lesson last season when suffering the painful finale of losing the title to local rivals, City.

Everyone’s talking (now more than ever) about how every fixture from now until the end of the season is crucial and about the need to avoid complacency. If United do slip up between now and May it won’t be for the lack of trying or a presence of complancency. No one’s letting anyone forget last season or the complacency that crept in.

Back-to-back Premier League defeats at Craven Cottage in March and then December 2009 have blighted United’s fairly decent record there, but with just one less draw [4] than wins [5] there in the last 11 fixtures, are Betegy right to give United a 45% chance of winning? Are the bookies selling their punters short offering United at a mere 1.57?

Well, I questioned the Betegy prediction on Wednesday when they predicted Southampton to score. They’ve done the same again for tomorrow so who can argue with them?

Rio Ferdinand “will definitely play tomorrow according to Sir Alex who also announced that Jonny Evans would be back in training today but Ashley Young is the only real casualty at present.

Sir Alex said he would “maybe freshen up one or two positions” and went on to encourage the travelling fans to make a difference at a ground which gives the impression of being tight.

With the absence of talisman, Dimitar Berbatov, Fulham look even weaker on paper than they actually were at Old Trafford last week but I fancy Sir Alex to choose a strong, aggressive midfield unit to get (and hopefully keep this time) control of the game. 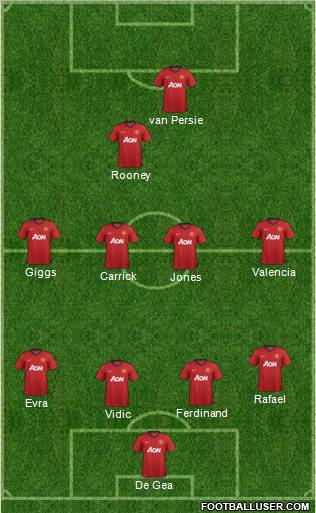 With just two games remaining between now and Madrid away, I think Ferguson will have his eye on getting Rooney and RvP bang in form – together – at the same time. For that reason I see the two starting both games in an effort to work on their combination play.

That leaves the wings where hard work tomorrow will be a key component of any success we get. In the absence of Young and Giggs’ omission from Wednesday’s squad I imagine a rested Giggs could be asked to do a job in his natural left winger role while Valencia is asked to reignite his form on the right.

By the time [surely] our only realistic title challengers kickoff at 4pm on Sunday, United could be 10pts clear at the top of the league. With those rivals (City) hosting a better looking Liverpool side with the acquisition of Daniel Sturridge, maybe the pressure could get too much for the now Balotelli-less City to handle. 10pts clear Monday morning anyone? I’m not sure, but there’s a definite possibility this weekend could be a good one for United who need to get their business done with ruthless efficiency on Saturday, then sit back and hope bitter rivals Liverpool do us a favour on Sunday. Too much too ask? I don’t think so.

If you haven’t yet registered with Betegy please follow the link. Once registered, head for their History tab. In there you’ll find the history of all the recommendations made and results gained. So far this season (in the PL) they boast a 96% success rate in games where they recommended a certain team to win. Not bad stats by anyone’s standards.

What team do you expect to see lineup come Saturday tea-time?

Can United keep a cleansheet? Who’ll play where?

Have your say now……