Can Foster Capitalise On Lucky Break? 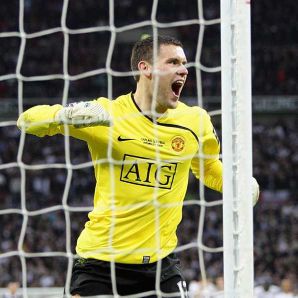 Luck isn’t really a word you would associate with Ben Foster. He’s had more than his fair share of misfortune during his stop-start career thus far although this could be the chance that the England international has been waiting for and, if you can excuse the pun, I’m sure he’s ready to grab it with both hands.

Yes I’m sure the news will have filtered through to you by now but for those not in the know, our number 1, Edwin van der Sar, has been ruled out of action for up to eight weeks meaning he will inevitably miss the start of the season.

Van der Sar suffered the injury when he saved a Daniel Pranjic penalty in the 7-6 spot kick defeat to Bayern Munich in the Audi Cup last week. The 38-year-old has therefore undergone surgery on what has been diagnosed as a broken finger and bone in his left hand.

So step forward Benjamin Anthony Foster. This really is his big chance, or so you would have thought. I know we have Tomasz Kuszczak waiting in the wings too but to be honest I’d be more confident if John O’Shea was the man put between the sticks.

OK so that last statement was a tad harsh, I agree, but Foster does look the obvious replacement. When the now 26-year-old signed a new deal last month that will tie him down at Old Trafford until June 2013, Sir Alex confirmed himself on the club’s official website that: “Ben is seen as one of the best young goalkeepers in England and we genuinely see him as a successor to Edwin.”

Does he have the credentials then? Well I don’t think that’s really up for debate. We all know that Foster has the ability as he proved in the Carling Cup Final victory over Spurs. I believe it’s a question of whether he is capable of handling the pressure and stepping up into the limelight. In fairness, as a Manchester United goalkeeper, you’re rarely faced with a barrage of opposition attacks but on those few occasions he will be called into action, it remains to be seen whether Foster will keep a cool head and cut out any potential errors.

Ben Foster certainly deserves his chance and while most United fans are undoubtedly reeling at the thought of van der Sar being missing for the first bundle of games this season, Warwickshire-born Foster will be secretly delighted at the chance he will have, or you would expect him to have, to step-up.

I mentioned that luck isn’t really Foster’s forte and for the countless occasions he has been particularly unlucky, no one can begrudge him this stroke of good fortune. Unfortunately injuries have been the fundamental stumbling block in the progression of the career of a truly promising goalkeeper.

After a broken finger here and a twisted ankle there, Foster is now back in contention having missed the back end of last season. With a World Cup just around the corner, the next couple of months could prove the most crucial in the career of the former Stoke City keeper.

An error-prone Pole and the recovery rate of the highest capped Dutchman in the history of international football stands in the way of Foster staking his most potent claim yet that he is ready to permanently vacate the number one jersey for both club and country.