So How Good Is Ben Foster? — A Watford Fan’s Perspective

So Ben Foster has finally played as many games for Manchester United as he has for England. United fans might not know too much about him (apart from his debut against Derby) so I thought Iâ€™d let you know what to expect.

As a Watford fan I would say that Ben Foster is somewhere between God and Gandhi in relation to his importance in the history of the world. For two seasons at Vicarage Road he performed like no other keeper I have ever seen on the hallowed turf. Weâ€™ve had some good keepers down at Watford including the young David James and Unitedâ€™s own goalkeeping coach Tony Coton, but nobody came near to this exceptional young number one.

Standing at over 6â€™2â€ the 24 year-old keeper arrived on loan from United at the start of the 2005-06 season as a 21 year-old. Watford were tipped by everyone for relegation, and the signing of a young inexperienced goalkeeper with a handful of first team games for Wrexham did little to lift the atmosphere of pessimism.

In truth, in the first few games he played for The Hornets, Foster did not look too sure of himself. The fans were wondering why Aidy Boothroyd had brought him in. Gradually, over a period of a dozen games Foster won the crowd over with a series of excellent performances. His agility and shot stopping was second to none and his success ratio in one on one situations must have been close to that of Peter Schmeichel.

That season, against all the odds Watford found themselves promoted to the Premiership. Marlon King took all the plaudits for his goalscoring exploits, but Watford fans knew the success owed at least as much to the brilliance of Foster.

In the Premiership Watford struggled and finished bottom of the league. We were rarely beaten by a big score and twice that we conceded four times was against United, against whom Foster was not allowed to play. He was voted as Watford fans player of the season with an enormous percentage of the votes. 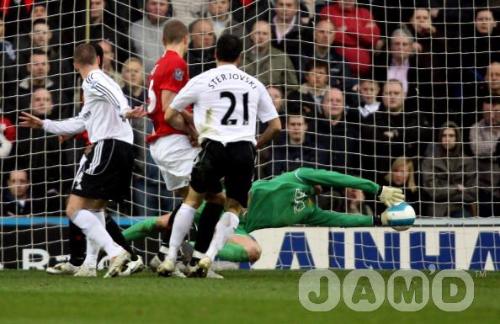 Despite what he showed at Derby on Saturday, another hugely impressive aspect of his performances at Watford was his quick, long and accurate distribution. Although it may be fair to say that United arenâ€™t quite as direct as Watford (!) this aspect of his game could add another dimension to Unitedâ€™s attacking play.

Prior to his unfortunate knee injury in the summer I was certain that Foster would be challenging for the number one jersey at Old Trafford this season. I was also convinced that he would make the England shirt his own. Oh for Ben Foster against Croatia.

There is no doubt that Foster will prove, as long as he fully recovers from his injury, that he is the best young goalkeeper in England by a country mile. Scott Carson, Joe Hart, Chris Kirkland, all decent keepers but Ben Foster is in another league.

Fergie spotted his potential whilst on loan at Wrexham from Stoke City. He was presumably alerted by Darren who was at Wrexham at the time. United signed him without Foster having played a first team game at Stoke. After just one pre-season friendly appearance for United reserves he was loaned out to Watford. The rest, as they say, is history.

The news had just broken that Sir Alex was prepared to let Foster go back out on loan after he recovered from his injury. With Watford struggling away for promotion I was very excited. Then Van Der Sar gets injured and Kuszczak, who is nowhere near as good as Foster, got himself sent off and the dream of Ben Foster back in the Hornets goal was gone.

Having read through this article I wondered whether I might have gone over the top with my praise. Believe me, I havenâ€™t. He is that good.

If he plays as I know he can, you United fans are in for a treat.

Graham is a regular columnist at Soccerlens, and a long-suffering Watford fan. He also writes at Views of a fan.

For further reading, on ‘keepers in general, here’s an interesting article: Keeping the Bench Warm â€“ The Trials & Tribulations of Back-Up Goalkeepers