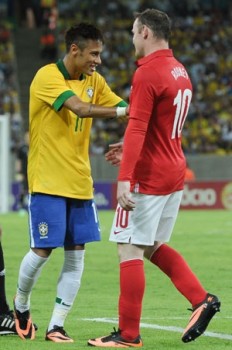 SkySports are this morning reporting that Barcelona newboy – Neymar – wants Wayne Rooney to follow him to the Nou Camp.

Here’s the report which includes quotes from Neymar in which one of them he even (alledgedly) says Rooney is technically gifted!

Wayne Rooney has been encouraged to join Barcelona by Camp Nou new-boy Neymar as speculation continues to surround the future of the Manchester United striker.

England international Rooney, who has two years left on his contract, requested a transfer at the end of last season and has been linked with a £25million move to Barcelona, Real Madrid and Chelsea as a result.

Reports on Sunday claimed the former Everton youngster has held a secret meeting with David Moyes and has told the incoming United boss he will stay at Old Trafford if he gets a new deal to replicate his current big-money terms.

But ahead of the Confederations Cup final, Brazil star Neymar wants Rooney to follow in his footsteps and move to Spanish heavyweights Barcelona this summer.

Neymar said: “The style of football we [Barcelona] play and the level of the players we have – we are the perfect club for the top players to join.

“I have met Wayne on a few occasions and he seems a good guy but importantly, he is one of the players I admire most in the world.

“Wayne is one of the most gifted and technical players in the world.

Can there be any truth in this? Why would a new kid on the block run his mouth like this at his new club?

Could Rooney make the grade at Barcelona? Is he good enough to adapt to their possession game or would he, as I believe, be a weak link for them?

One thing is for sure though, and I’ve said this since his apparent transfer request, the sooner he’s out the better it will be for everyone. The last thing the club as a whole needs right now is this kind of problem within. Get him out ASAP so the new era can begin.