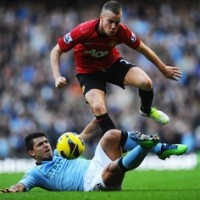 Among the many talking points offered by the 164th Manchester derby that were unfortunately overshadowed by the melee that followed Robin Van Persie’s dramatic late winner, there was the sensation that United might have taken a much-needed step towards the future.

Sir Alex Ferguson has recently often been criticised for what some consider an unneccessary willingness to adopt turn-over. United have flirted heavily with a diamond formation this season, in a desperate attempt to finally solve the terminal illness that has blighted their midfield for a long time.

With a  seemingly depleted midfield and considering the strength of City’s engine room, the lacklustre performance United had offered in the corresponding fixture last April United fans were short of confidence ahead of kickoff. 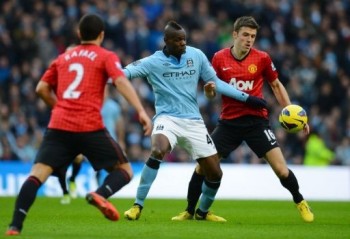 For a side that had so often hinged their fortunes on attacking football, United went down without a whimper in the derby last season – too scared to take the game at their opponent, too timid to impose their philosophy on the pitch.

The same attitude almost cost United against 10-man Liverpool earlier this season, as it became obvious that Sir Alex Ferguson’s over-reliance on Ryan Giggs and Paul Scholes could prove detrimental.

Leaving two of his most loyal – and immensely successful – lieutenants out of one the biggest game of the season must have been a tough decision for Fergie, but the majority of United fans would have been extremely relieved to see their team set out with a positive, attacking line-up.

United knew they had to win the battle in midfield to give themselves a chance to win the game, and Tom Cleverley and Michael Carrick were magnificent as they displayed the kind of purposeful, positive attitude United’s midfield had been missing for so long.

Cleverley’s pass accuracy was over 85%, Carrick’s slightly lower but his interceptions were crucial to unleash Wayne Rooney, Antonio Valencia and Ashley Young as United reverted to their old self, playing quick counter-attacking football.

United have obviously not solved all of their problems, but the derby confirmed that of the midfielders at their disposal, Cleverley and Carrick – and the Anderson seen over the last few weeks – must now be the starting combination for they offer what Ryan Giggs and Paul Scholes are no longer able to offer over 90 minutes,  particularly in big games where United need to impose themselves.

This season Sir Alex has seen his side conquering Stamford Bridge and the Etihad adopting a bold approach – a look at the past but, hopefully, a step very much towards the future.

Is this United lineup capable of beating City?
Is the modern day United fan an embarrassment?