An ode to Danny Welbeck 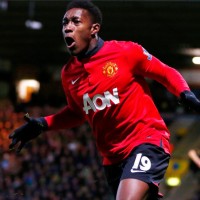 It was almost the perfect story. Little lad growing up in Longsight, joins the the club he supports at eight years old, progresses through the academy and finally bursts into the first team at only 17. Everything followed the script wonderfully. All that was left was for Danny to cement his place in the first team and eventually retire at the club he had supported at eight years old.

The jokes hide the pain but it must be said that there is no sarcasm when wishing Danny the best of luck and saying he will be sorely missed. So open a bottle of Glenfidditch, turn on some Ed Sheeran and allow me to walk you down memory lane.

Though Danny won’t be remembered as the best striker to play for United, not even the second or third best during his time at the club, he will be remembered for the character and cheek he brought to United. This cheekiness easily translated into his football, always attempting a back heel or an audacious little flick when the simple option might be the best. Things that United fans will have been left frustrated with at the time, but on reflection now he’s gone, they were brilliant.

Some of the memories Welbeck leaves United fans with are irreplaceable. His goal against City in the FA Cup is something many will cherish forever. That goal meant more than any hat trick, overhead kick or Jennifer Lawrence leaked photo. The truth is that it always meant more when Danny scored. Not just because it was against City, not just because it was a brilliant strike but it’s the idea of a local lad scoring for the team he loves against a team he despises as much as the fans do.

Assuming that your keyboard is now awash with tears and not for the usual reasons it would only be right to evaluate Welbeck’s transfer objectively.

Danny needed to move on. He has a lot of potential, pace, skill and passion. Despite these factors he wasn’t going to start for United. The romantic notion that he would be willing to sit on the bench, similarly to Solskjaer, because he loves the club would be totally ignoring the fact that he has a right to build a career for himself.

Maybe he could have gone on to be a United legend, but the timing wasn’t right. United needed instant success, whereas Danny needed patience.

Arsenal have got themselves a wonderful striker who is destined to have a great career. If the morons outside the Emirates who celebrated on Sky Sports News Deadline Day when the transfer was supposed to have fallen through end up under a bus somewhere in Hackney I won’t shed a tear, but Danny will hope they turn up to games, so they can watch him light up the Emirates and emulate his boyhood hero Thierry Henry.

Though he might wear the Arsenal kit United fans will never hold it against him. Hopefully one day after he’s developed into the world-class striker he has the potential to be, he might be back at Old Trafford.

Danny Welbeck. Forever a Manchester Lad from Longsight. Our Danny.