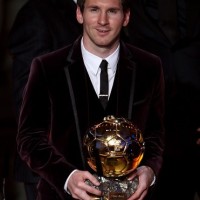 Today I just happened to come across the widely published Bloomberg Sports list, which rates the top 50 footballers of today. I love lists, I live for lists but this one just made me want to vomit. It apparently collaborates scientifically based information to evaluate players on skills relevant to their position. Well I looked at the list and had to have a laugh at the sheer lack of insight and true understanding of the game in general by these American know nothings.

Bill Squadron, the President of Bloomberg Sports had the following to say: “We continue to look at new ways to use analytics that will be interesting to fans, and are pleased today to unveil what we believe will be a game-changer in the way professional football is looked at in the future.” “Analytics is becoming more and more prevalent in both the minds of the fans and in the decision-making power of the clubs, and we are confident this index will help both stir healthy debate and be a great measuring stick for player evaluation going forward.”

WTF are analytics? Analytics “is the discovery and communication of meaningful patterns in data. Especially valuable in areas rich with recorded information, analytics relies on the simultaneous application of statistics, computer programming and operations research to quantify performance. Analytics often favors data visualization to communicate insight.” I am very aware of how statistical based garbage like this has destroyed baseball in America. A mathematical theory called Sabermetrics invented by a looney tune named Bill James has influenced many a baseball GM over the past twelve years to abandon tried and true old school methods of talent evaluation for a method that allows geeks, not scouts or coaches to sit in front of a pc and tell the world who are the best players, based on a reinvention of what they think is the most important stat in baseball, on base percentage. Rubbish I say. Although OBR as it is abbreviated to is important, the game is still driven by the home run and by strong hitting, speed, fielding and pitching. Sabermetrics is the main theme of the Brad Pitt movie “Moneyball”, based on the best selling Michael Lewis novel.

I find it incredibly disturbing that the sport that is the finest and most natural in the world is now getting broken down into statistics and grids. It used to be a sport where kids picked up a ball and kicked it around on the street. Primal and simplistic in it’s approach and appeal. Now the game is supposedly manipulated on pc’s by computer geeks and player values quantified based on statistics that may or may not be an accurate assessment of a given player’s overall value to a team. Nevertheless, I decided to challenge this top fifty list that I think is total Wankerville with my own, which may or may not be total Wankerville in your eyes. One thing is for certain however, I base my list on players quantifiable talent, not just statistics.

Like a baseball scout I judge players on their tools and their character, not on the numbers some fat Jonah Hill crunches in front of a pc while munching on some Cheetos and thinking himself an expert. I’m no expert either, but what I am is a fan of the game and man who watches and observes thousands of hours of football a year. That by itself makes me infinitely more qualified than the nose drips at Bloomberg in producing a more accurate list of they world’s top fifty players. Bloomberg, stick to American football and leave the world’s greatest game alone. You are a financial magazine and you and your staf no nothing about sport other than the business end of things. Stick to your roots I say. Just my opinion. Here then is the Bloomberg list in black font.

My choice in order are highlighted in red.