All too easy four United against sorry Villa 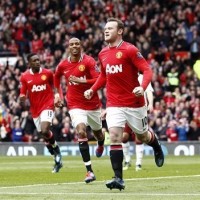 Manchester United restored their 5-point lead at the top of the Premier League with a 4-0 win over Aston Villa courtesy of two goals from Wayne Rooney and one apiece from Danny Welbeck and Nani.

Much like in their game against QPR, a controversial penalty incident involving Ashley Young was the talking point of the game, as United were lucky to be awarded a spot kick inside seven minutes when Young appeared to have made the most of a contact from Ciaran Clark.

The former Villa man went down rather theatrically and, while Clark did collide with him, Mark Halsey decided to point to the spot and guarantee himself a week under the media spotlight after his decision – no doubt in company of Martin Atkinson, following the latter’s superb performance in the FA Cup semifinal. 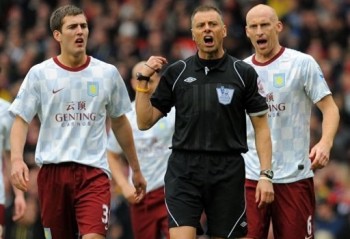 After the game, Fergie admitted that Young had “milked it”. Young is a fine player but there’s no place for this sort of conduct at Old Trafford and, while pleased for the penalty, no doubt a lot of United fans would have had a sour taste in their mouths.

Rooney made no mistake from the spot, scoring his 30th goal of the season as United scored for a record-equaling 47th consecutive time at home in the league.

From then on was virtually plain sailing for United even though, despite the early goal, they somehow lacked spark going forward at times but they’ll be pleased with the way they’ve bounced back from Wednesday’s disappointing defeat at Wigan.

With Scholes, Rafael – the Brazilian notched yet another excellent performance – and Welbeck back in the side in place of Giggs, Jones and Hernandez, United controlled the possession, easily aided by an appallingly poor Aston Villa side, who have now registered only in the last 31 meetings between the two sides.

Villa had actually created the first chance of the game as Weimann had tested DeGea earlier on but that was as good as it got for them. In the end nowhere near what they would have needed to stop the home side who were kept at bay a couple of excellent saves from Shay Given.

Danny Welbeck saw his close range header well blocked by Nathan Baker, then Given was called into action by Rooney and produced a smart save to prevent United doubling their lead. 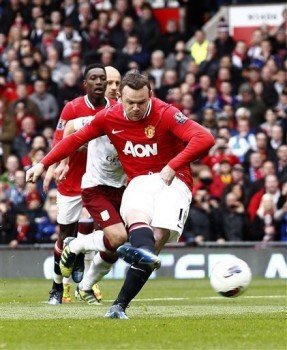 Villa did not capitalise at the other end, Clark’s header whistling wide while Stephen Ireland’s effort from long range produced similar results.

Given was called into action again as he denied Welbeck with a smart save, soon after Scholes had flashed a volley just wide of the upright.

The Irish goalkeeper saw his efforts come undone in the last minute of the first period, as Evra’s overlapping run yielded an inviting cross into the box, which sparked a calamitous piece of defending from James Collins and Nathan Baker who allowed the ball to reach Danny Welbeck at the far post.

The United striker made no mistake, putting United 2-0 up and virtually sealing the game with a period to go.

Villa started the second half with more intent, trying to contain United and created half a chance themselves as Emile Heskey saw his header tipped over the bar by an ever vigilant DeGea who has now registered four clean sheets in the last four league games United have played at home.

Despite a performance below his standards, Rooney added a second goal fifteen minutes from time as he exchanged passes with Valencia at the edge of the box, before firing it a low, right-footed effort which caught Given wrong-footed.

That was to be Rooney’s last contribution of the day, as the striker departed to make space for substitute Dimitar Berbatov, while Cleverley replaced Scholes.

United could have added to their tally as Given was again in the right place at the right time to block Welbeck’s deflected effort and then again as he kept out Valencia’s shot as the Ecuadorian’s strike took a deflection off a Villa defender. 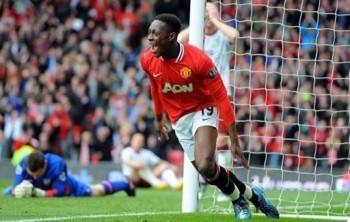 Berbatov saw his goal-bound shot blocked and Jonny Evans headed just over from the resulting corner but, deep into stoppage time, United eventually had their fourth goal as Nani, who had replaced Young after with an hour played, marked his comeback with a goal, drilling a shot past Given after an excellent ball through by Jonny Evans.

The result put United firmly back in command after City had temporarily closed the gap yesterday and, with four games left, United could clinch the title against their neighbours when the two sides meet on the 30th of April.

Sir Alex won’t be thinking about that just yet, though. Everton next week is a must win game for his men.