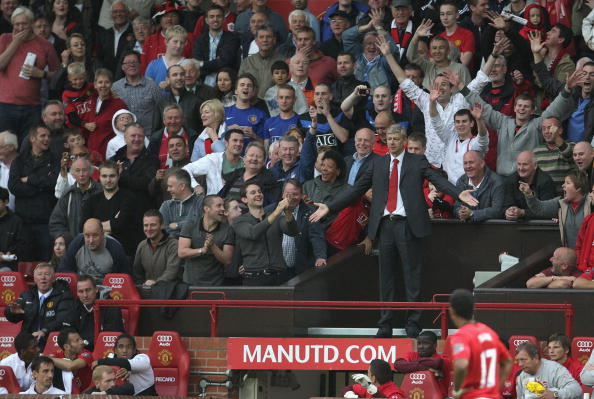 Scott at Republik of Mancunia made a valiant effort at throwing a positive spin on Saturday’s result. Of course, it was a win after all, so, really, what can be more positive than that? And he did a good job of trying to alleviate certain shreds of negativism that may have afflicted a lot of United fans.

However, if you were to ask me what I thought of yesterday, I’d say it’s among the strangest matches I’ve ever seen against ‘big four’ opposition. (Yes, even the 1-0 at Anfield, many moons ago, felt different. In that game the win tasted sweet. Here, I really don’t know what I’m having.)

Having made pronouncements at the start of the season on the need for the likes of Berbatov and Rooney to step up, the return of the four-four-two formation, it was surprising (to put it mildly) to see Ferguson falling back on old habits employed in recent years when faced with good opposition. This was a home game, Arsenal’s midfield was unlikely to be as physical as say, Chelsea, and we needed to test a new Arsenal defence.

But Ferguson went with a 4-5-1 (or a 4-3-3, if you please), opting for Giggs to play in the ‘hole’. The first 45 minutes resulted in attritional football from both sides, and it took a gifted footballer, in the form of Arshavin, to create a goal out of nowhere.

The second half saw marginal improvement as Giggs stepped up his game. However, anything positive we had to show for was marred by Michael Carrick, who was very poor, losing the ball far too often. There were quite a lot of culprits on the day, and it would be unfair to pin the blame on one specific player, but Carrick stood out like a colossus of mediocrity.

I might be sounding like a broken record right now, but we lack the thrust from midfield, someone direct enough to not only run at goal, but also bring in the likes of Berbatov into the game as well as not be shot shy. But it showed yesterday in the way Rooney was isolated upfront.

Statistics will paint a much different picture, but there are a lot of intangibles that make a match. I will be doubtless accused of negativity, but I missed a spark I expect from United sides; something that makes us tick. [For argument’s sake that person was Diaby on Saturday, but then…] However, I will take United wins regardless of how they come, although the aftertaste might not be necessarily great.

A few words on players that emerged with a lot of credibility: Patrice Evra has been fantastic this season. He had a slowish start, but over the past two-three games has been outstanding, and doing some of the offensive work we’d expect from our wingers. Nani seems to continue showing improvement and decision making, and I want Ferguson to persist with him. And Fletcher had a fantastic game breaking up play and was all over the place. He is limited in his distribution (and lost the ball on several occasions) but as a defensive midfielder he had a massive say on the result.

Ben Foster had a mixed game. He’s an excellent shot-stopper, but I am still to be convinced over his ability to deal with crosses. At times he’s dealt with them perfectly and at times he’s flapped — a strict no-go, for a defence that prides itself on clean sheets.

The match will however be known for some absolutely inept refereeing from Mike Dean who did his best to stop the flow of the match at every chance he had, and also tried to be the centre of attention. Sending off Wenger for kicking a bottle was ridiculous (albeit amusing — honestly, that image above has to be one of the iconic images of this season). However, Wenger insinuating that the ref was favouring ‘one side’ just because it was being played at Old Trafford has to be among the most bitter, thinly disguised tirades of this season. I have never subscribed to the conspiracy theory of referees be it on any ground involving any opposition. I think they are professionals expected to do their jobs and in their mistakes are out of their incompetence rather than any hidden agenda. But that’s Wenger being Wenger, and I wouldn’t want to waste my time with that. Arsenal fans have a right to feel aggrieved at the result, although I wouldn’t subscribe to their bleating about their ‘bossing’ of the game.

And finally, Rooney didn’t dive. He played for the foul, but didn’t dive. Almunia made a meal of it by lunging like a mad man and fell for it. I saw very little protest from the Arsenal players even, to justify debating this at all.

This ends part one of three matches that will go some way in saying what kind of side we are (I would still say we will see very little champagne football, and more “1-0 to the United” type. But let’s wait and see, eh?) Spurs and Man City are up next — with Champions’ League fixture in between against Besiktas — following a long international break.