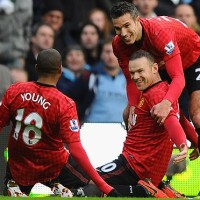 Pre-season, this derby was billed as the season defining game for both teams. The title race would be so close again that only a gnat’s breath would be able to separate them.

However, never have football ‘experts’ been so wrong. City have stumbled whilst United have stepped up and obliterated the rest. But, as with all derbies, this doesn’t mean the fans care less about this edition of the Manchester derby. Both sets of supporters are still desperate for the sweet elixir of victory.

Get a free bet courtesy of Bwin

Monday night’s game has been predictably framed around the last time City visited Old Trafford (that’ll be the last time I mention that!) yet, unlike that fateful day, only one team is coming into this fixture somewhat on form. City are lacking in performances this year, taking 11 points from the last possible 21 and only winning one away game in the last four, a run that includes losses to Everton and Southampton.

Manchester United’s home form is, on the other hand, impeccable. Much like the two previous seasons, the title winning team have built their charge on the foundation of home performances, and this year, apart from the momentary blip against totenham, United have won every home game and haven’t lost home or away since Norwich away back in November.

Arguably, City have more to play for, with their ego already battered, bruised and discarded into the gutter after a harrowing and brittle title defence. But, their Manchester counterparts have the incentive that, if they win tonight, not only will they complete the double (home & away wins over City in the same season) and thus wrest back the bragging rights that were lost so ignominiously last year, but only a mere 4 more points would be needed to secure the title.

If you are to believe Mancini’s recent desperate ravings, injuries are a mitigating factor and a reason for why he shouldn’t be blamed for the tepid season, forgetting of course the swathes of mishaps that cut through the United squad last year.

Luckily for Mancini, they have an almost fresh team ready for the title run in (ahem). Only Jack Rodwell, their eternally cropped midfielder and long term absentee Micah Richards currently reside in the medical room. For United, Wayne Rooney and Rafael should return, whilst Jonny Evans and Nemanja Vidic are doubts. 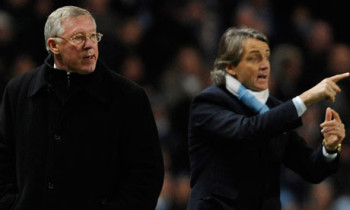 If previous big games line ups are to be replicated today, Ferguson will opt for
4-4-2, yet with the paucity of in-form wingers on offer at the moment, he could shape something slightly different. None of Antonio Valencia, Ashley Young or Nani fill you with too much confidence at the moment, but perhaps Valencia offers the most tactical discipline whilst live-wire Nani demonstrates occasional brilliance in attack. Young is more dependable and has often been chosen by Ferguson against City, but due to the lack of options, Ryan Giggs could slot in at left-midfield.

Conspiracy theories and injuries notwithstanding, most people expect Wayne Rooney to start behind Robin van Persie, and their performances will be the key to the outcome of the match. At Eastlands in December, Rooney was clinical and allowed United breathing space by taking his chances expertly whilst also working to help the team defend. The worry for United is that, despite being solid defensively recently, they haven’t had the same fire power as early in the season with both Van Persie and the famed Wing-play not living up to expectations.

Van Persie is however a big game player and will know that this is as good a stage as any to return to his goal scoring feast he was enjoying earlier in the season.

In central midfield, there is a question over who starts next to Carrick, with the two likely options Phil Jones and Tom Cleverley. Ferguson might be inclined to choose the former, more defensive option, after his performance against Chelsea where United were able to suffocate the Chelsea attacking thrust before a moment of genius unstuck them.

City play a similar, central style to the Londoners, and Jones’ ability to deny space in between the lines could be key in shutting Silva and Aguero out. Yet, attack is often the best form of defence for United so Cleverley’s passing touch might count against Jones, who often seems to stymie the team from exerting their true attacking potential when he is played in centre mid.

Unless Roberto Mancini goes fully mentalist, his predicted formation is a type of 4-2-2, with David Silva, Carlos Tevez and Sergio Aguero furthest forward whilst James Milner could play a disciplined role on the right.

Gareth Barry is likely to form the base for Yaya Toure’s barnstorming runs, and could often be the last man in midfield if United execute their counter attacking prowess. Tevez and Aguero will look to their direct running and quick interplay to unlock the wily red defence, who haven’t conceded in 627 minutes of Premier League football. Tevez is sure to be sprightly, having scored 7 in 7.

Depending on whether Jones or Cleverley play, the game could be tight or frantic. If Jones plays, I think it will be 1-1 or City will sneak it by one, and it would be disappointing to see a lack of adventure from the home side. But were Cleverley to play, i think United would outgun city and come out comfortable winners 2-0 or 3-1.

Some people believe the title race is over but let’s see what tonight brings before we celebrate prematurely, here’s why

Get a free bet courtesy of Bwin

Time to shut Mancini up for good [WALLPAPER]
Lost the Battle, but way ahead in the War [WALLPAPER]