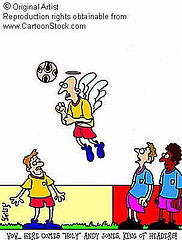 There are very few flaws that one can find in a masterpiece. When you do, indeed, you tend to wonder if those rare gaps were accidental after all- or if they were part of the contrivance of the great mind behind the rest of the glory. Fergie’s third ‘reich’, to me is posing just such a quandary. I really don’t know whether what I’m saying here was overlooked by him, or if he’s got a twinkle in his eye and a smirk on the inside of that wrinkled gum-chewing countenance. Either way, it is pretty loud a gap as I see it.

This season’s team has got it all. It’s got the depth to take quite a few bad hits and still come out fighting. It’s got the kind of pace required to dazzle the lower rungs of the league and irk the top flight clubs no end. The skill of some players in the squad is unquestionable. Only a fool would take this side lightly or write it off, even on paper. Moreover there is, behind his line of glittering gems, the man who knocked the scousers “right off their f*cking perch”. And he’s in no mood for a dry run.

The trouble is, that despite the undeniable skill and strength of the squad, our prime problems from last season are still lurking around the corner. We don’t have to look too far back to figure out that both our full backs traditionally run up the pitch to deliver crosses into the box, leaving the wings pretty much exposed. They have no cover. Giggs is not getting any younger and his replacements are all players that I doubt can put in a decent tackle to anyone’s benefit without prompting the ref to jump the gun.

Up front, our deep striker role is still a big problem. Rooney, bless his grit, is still only so tall and so good with his head in the literal sense. Rossi is not exactly towering. Saha and Smith are our only hope for getting anything to the back of the net via the aerial route. Agreed, our dependence on the 442 winged crosses has decreased manifold since goldenballs left, but that is no excuse for having very short players upfront with little or no aerial prowess when compared to the mid-table sides or even some relegation-battlers. Midfield you say? Carrick and Hargreaves. Scholes is not my idea of powerful in the air. Carrick falls short too. Hargreaves I haven’t really noted. Fletcher, I’m sure, is rather a dunce in this department, relatively. That leaves our only aerial power in the backline where, I might add with some pride, it is nearly overpoweringly good.

Imagine, given this, a match in the CL against a tough midfield opposition like, say, Inter. Or Arsenal. Or Pool with that Sissoko chap bouncing all over. Or Sevilla with Kanoute taking all those lofty balls from both keepers and keeping the possession. Where, pray, will all our skillful play be minus good midfield possession and dominance?

I wonder if this is not our greatest bugbear. Especially since our set piece marking will take the greatest hit apart from possession because there will be only four good markers in a corner situation while the others hope the ball reaches ground before it reaches the head of Henry or Eto’o or Anelka or Klose. I’m just worried sick. No team is perfect. Nothing ever is. I guess this is just our little Achilles’ Heel. And I hope Fergie knows well nigh enough about it.