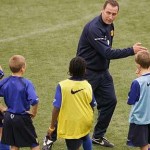 It’s that time of year again. The hype and hysteria of ongoing transfer saga’s continue, the opening weekend has come and gone and pundits the length and breadth of  the World are having their say on the season’s final outcomes already.

Well, for others like me, the season is yet to begin. This Saturday (20th August 2011) sees the return of the Academy Premier League and the showcasing of tomorrows pro’s.

After a wonderful season for the Academy last time around, it’s the turn of new scholars to get their first taste of what football – and life – might be like, if they have the desire, talent and above all else, the right attitude to progress through the ranks at Manchester United.

It’s a word you’ll hear me use almost every week. It’s without doubt the key function of the Academy. The popularity of Academy football is growing, I mentioned that last season, but so too is the use of Social Media. As we’ve recently witnessed, Social Media is rewriting the rules of ‘the game’ and the way people behave. It’s also having an impact on the number of people who are interested in football at this level.

With bloggers galore all tweeting their latest review or report like others do about the first team, it’s hard not to imagine that the rise in popularity will slow down and end there. So thanks in part to Social Media, larger attendances and a greater spotlight on everything the players do, the Academy now arguably provides them with a progressive experience that more closely resembles the life of a professional than it ever has in the past.

These kids will visibly, physically grow in front of your eyes as the season unfolds.  Remember, at this age they no longer attend school (they attend part-time colleges) and they ‘work’ 5-6 days a week (including match days) so it’s inevitable the natural growth rate is accelerated by the explosion of targeted exercise and training. Coaching intensifies as tactics and training sessions now become far more serious than they ever were after school for three nights a week over the last few years!

Another key consideration when following this level of football is experience. The idea is to give the kids experiences throughout the season to assist their ‘progress’ and help them ‘develop’. The two years they spend playing in the Academy bridges the gap between football being a ‘game’, and football becoming a professional occupation. Whether an experience is good or bad it doesn’t matter, both are equally important.

So?….Why am I harping on about that stuff anyway?…..Most people will recognise the function of the Academy, they don’t need telling!……….apparently not.

As with many new technologies there are just as many positives as there are negatives.

In a recent trip to Ireland to compete in this year’s annual Milk Cup, United were handsomely beaten 5-1 in the final by Qatari side Aspire. Not for the first time, mine and other bloggers’ Twitter timelines were littered with throw away comments about how poor this player is, and how inept our leftback is and so on. I’ve chosen to omit the feckless and irrational choice of language that’s used to berate these kids via Twitter, because that’s exactly what it is.

The leftback on that occasion was Gyliano van Velzen. GVV usually plays left wing, left midfield or centre forward. Due to a minor injury crisis the manager required someone to step in and play out of position and van Velzen did it. In truth he had a shocker and got targeted by the opposition, but if you’re serious about watching football at this level then please be aware that what you get isn’t always what you see. He and the manager will have learnt a lot from that………progress…..development…..experience.

Poor results, bad performances, missed chances, dropped catches, highs and lows. They’re all ‘part and parcel’ of a player’s development. It’s a serious shame that people view the Academy games using the same perspective they use when they’re watching the first team……it’s a completely different ball game…..well ok it isn’t, but you know what I mean!

For those of us who use these simple rules to assess the games we watch at this level it promises to be an insightful season – and – if it’s a successful one in terms of results, it’s a welcome bonus.

Only a handful of players remain from last season’s FA Youth Cup winning squad. Charni Ekangamene, Tom Lawrence, Tyler Blackett and Gyliano van Valzen featured throughout the season while Joe Coll, Liam Jacob, , Luke Hendrie and Luke McCullough are also second year scholars but rarely figured last term. All of these players are in their final Academy year and should all figure heavily throughout the season.

You might recognise a handful of the new-boys after they featured in 2 or 3 games towards the latter part of last season while regular squad players were recovering from injury, rested for the Youth Cup or away on tour in Italy.

Notably Rowley, Wilkinson, Rudge, Rothwell, Gorre and Barmy all figured in games against Liverpool away, Everton at home and then Leeds at home on the last day of the season. All these experienced playing with-and-against older boys for the first time and even playing with United’s reserves Reece Brown and Scott Wooton against Leeds.

A player who also figured in a few games late last season is Mats Moller Daehli. Played as a centrally attacking midfielder, Mats has great awareness and great balance and I think the potential to make a real impact on the Academy this season.

Tyler Blackett is a powerful left footed defender who likes to get forward. His speed and his passing might single him out as someone who’s versatile and could be used in different areas of the pitch as the season prevails, definitely one to keep an eye on.

Tom Lawrence is an attacking midfielder stroke forward who likes to link the play between midfield and attack. He possesses great skill and vision. Expect to see him running at defenders and intricate inter play between himself and Daehli that produces some memorable moments. Tom is a Welsh international who scored 6 goals last season including this little gem (youtube clip) against Liverpool at Carrington on a filthy Monday afternoon.

The league is structured into 4 groups of 10 regional teams and each team plays each other twice (home & away) and also plays 10 inter-group fixtures to provide a 28 game season. The match versus Portsmouth is one of the 10 inter-group games as is Southampton away the following week.

At the end of the season the 4 Group winners play-off to win the league title.

For more information on this go to the Premier Academy League – Wiki page.

Obviously it’s difficult to offer a review when I don’t know for sure who’ll be playing where, or what the opposition’s results are looking like. I do know however that Portsmouth’s ongoing financial restraints continue to hinder the Academy. This is taken from thechels.net:

The real impact of the financial strife Portsmouth have suffered in the last few years is being felt at every level of the club, particularly in the previously well-funded academy. Their class of 2008 was expensively assembled and talked up by the club but as of this summer not a single one remains on the books at Fratton Park. With just four wins last season, they continue to struggle but are remaining positive and make the best of what they’ve now got to work with.

Key Man: Sam Magri – by far and away the best prospect at the club, Sam was an ever-present alongside Nathaniel Chalobah in England’s Under-17 World Cup campaign this past summer and scored a penalty in their Quarter Final elimination. Not 18 until the final weeks of the season, he’ll remain in the academy team for a while yet and will be a welcome presence.

Manager Paul McGuiness doesn’t seem to have a preference towards one specific formation. He often uses 4-4-2 or an attacking variation of 4-5-1 that attacks as a 4-3-3, well at least with last season’s personnel that’s how he operated anyway.

I expect to see a 4-5-1 on Saturday purely because the squad appears to lack forwards, in fact they’re that bare there doesn’t appear to be an out-and-out striker/forward at all, I’ll list the players as a 4-3-3 and take a guess that Barmby might be the one to play through the middle.

Bring on the biscuits!

If you’re planning on following the Academy this season you can do it in many ways. You can watch all the home games live on MUTV and you can follow me and my updates on Twitter during the match live from Carrington and most of the away fixtures @Rimmerstweets.

I’ll be publishing previews and match reports here on RedRants and there’s also the official site to keep up-to-date with the league tables. I’ve also found this Academy site MyFootballFacts.com run by Spurs fan Paul. All results, fixtures and tables can be found there, it’s a lot better than the official site. Thanks Paul.

Anyone who ventures down to Carrington to take a look at the games for themselves, beware that at half-time Manchester United Football Club provide tea and biscuits FREE OF CHARGE in the training complex. Yes that’s right, they give something away free of charge……so obviously I tuck into the biscuits and I’d advise everyone to do so! If you see me outside feel free to introduce yourself and say hello but please not during the match…..I’ll be busy Tweeting updates.