A tale of two strikers 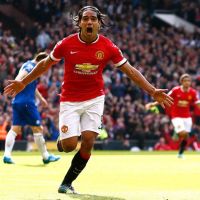 Since the dawn of time Manchester United and Liverpool fans have argued. Ancient cave paintings illustrate the fierce debates over which club is in decline and who is launching a resurgence. Even as man evolved to use tools and Liverpool fans continued to worship the sun the debates continued to rage. Currently the heated exchanges focus on who has been worth the money, Mario Balotelli or Radamel Falcao.

So far neither has set the Premier League alight, both standing in Diego Costa’s terrifying shadow. That said, one is looking like a work in progress and the other an impulse buy from the discount bin at Blockbuster.

When Liverpool signed Balotelli fans rejoiced across the country. The final nail in the tragic coffin. The ultimate addition to a team built entirely of mediocrity.

Brendan Rodgers had lost a player fans of other clubs loved to loathe and replaced him with a footballer who’s often been despised by his own fans as much as from supporters of other clubs. However, while the former plundered in 78 goals and assisted a further 48 over the last three seasons – in between racially abusing and biting fellow professionals – the latter netted 50 times and delivered 17 assists.

However, while Balotelli might not be the next Luis Suarez, his arrival was met with the usual fanfare reserved for event unfolding on Merseyside, while United’s decision to secure Falcao on loan was seen as a panic move.

Of course, the fact that United only took the Colombian on loan and are under no obligation to extend his deal did not matter one jot, nor did the fact that Falcao scored 30 goals more than Balotelli over the last three seasons – and two more than the racist cannibal, despite having his campaign curtailed by a horrendous injury last season.

The Italian maverick was to flourish under Rodgers, the new messiah of football, while Falcao was a crass piece of business, further proof that United could now only resort to chuck money to the wind in the hope of winning the odd game here and there.

Of course, Balotelli was classified as a bargain by the same fantastically unbiased sport journalists who described Adam Lallana as a “youngster” despite the fact he’s 26-year-old, while Daley Blind, two years younger than Lallana, was labeled a “risk”.

It really is spectacular how positive many Liverpool fans were regarding the signing of a player who had the lowest shot conversion rate of any player in the top tiers in Europe last year for AC Milan. The same player that in all of his 54 premier league appearances only managed two assists.

“This time it’ll be different”, cried those who wear red on Merseyside like a single woman in her thirties giving into weakness for a man who is never available and who, after four glasses of wine, will always leave her without flinching. That is Mario Balotelli, a man who is able to convince so many that he can offer riches far beyond his capabilities. Using Liverpool as his one night stand, the Italian has gone about his business as usual.

So far this season Mario has lived up to those devastatingly poor standards. More bookings than goals, his one goal in eight appearances is pathetic. A truly dismal return.

It’s not only the poor goal return it is also the fact he wonders around the pitch seemingly uninterested in everything around him. Not too dissimilar from seeing Tiger Woods endorsing the latest sanitary pad or colostomy bag. He shows up, smiles at the camera and collects the cheque.

Though Falcao has so far failed to be a regular feature on the score sheet, he has two assists and a goal to his name within considerably less playing time. Currently there is one player who’s more likely to be at the top of the brightly coloured Sky Sports info graphics and he isn’t named after a plumber.

Of course, as the obligatory cliche goes, it’s early days and Balotelli may prove everyone wrong and Falcao may find himself on the treatment table for a large proportion of the season. It is plausible though that like the other players that make up Liverpool’s £113 million expenditure this year, Balotelli will remain as ineffective as the South African legal system.

In the meantime Liverpool fans will fear that they could remain as impotent and lackluster as the animatronic corpse that masquerades as Bruce Forsythe these days.

But of course Liverpool fans aren’t bothered by the sale of Luis Suarez as like anyone who dares to leave them, they never liked him anyway.