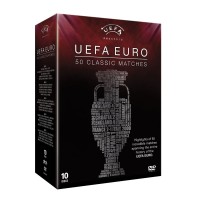 In our final DVD giveaway and countdown to Euro 2012 in Poland & Ukraine, RedRants has undoubtedly saved the best for last.

Just days before the tournament starts I sense the mood and the atmosphere throughout the country is changing, football glorious football is about to return, hopefully with a bang! It doesn’t matter what nationality you are or who you’re supporting. Fingers crossed this summers ‘Carnival of Football’ (if you can have such a thing in the Ukraine!) will produce football of the highest calibre and create hero’s & villains in equal measure, with luck we could witness the production of classic matches to rival those before it.

Spread over 10 (TEN!) discs, the UEFA Euro: 50 Classic Matches DVD is a chance to relive some of the greatest moments the tournament has produced in it’s fifty year history.

Each match is edited to thirty minutes of highlights. An opening montage sets the scene for the game and after the match footage a closing sequence will put the encounter into historical perspective.

These games encapsulate the passion, excitement and fabulous football that are at the heart of one of the most enthralling competitions in world football – the UEFA EURO. These landmark matches that are already etched in football folklore will make mesmeric viewing for football fans across the globe.

To be in with a chance of winning your very own copy simply answer the following question in either the comments section below, by Tweeting us @Red_Rants or leaving your answer in a comment on Facebook. The closing date/time will be at the final whistle of England’s first fixture of the tournament versus France on Monday night (approx 18:50 UK)

Question: Which former Manchester United player is England’s top goalscorer of all time with 49 goals?

Copies of this title are available for purchase now via Amazon with an RRP of £39.99 but currently selling at £20 it’s a steal and a must have to add to your collection of great football titles.