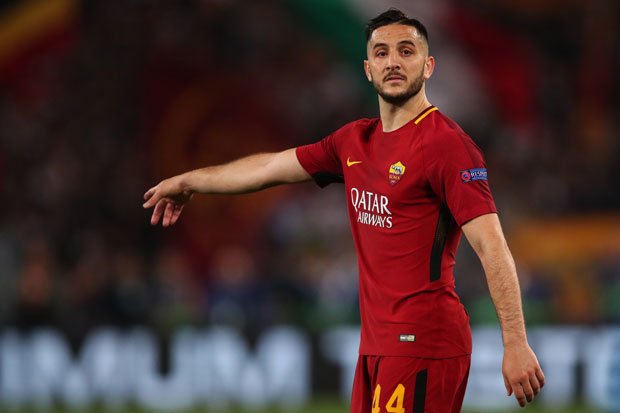 AS Roma centre-back Kostas Manolas has admitted he would be interested in leaving the Italian side to join a ‘big club’ like Manchester United this summer.

The 27-year-old has become one of the best centre-backs in Europe over the past four years since joining the Serie A club from Olympiacos in 2014.

Manolas was a big part of the Rome club’s shock run to the Champions League semi-finals last season as well as a third-place finish in Serie A.

The Greece international has long been linked with a move to England in recent transfer windows, with the Daily Star recently suggesting that Chelsea are preparing to meet his £32 million buy-out clause this summer.

However, the future of Blues manager Antonio Conte still remains in doubt as the West London club are still expected to bring in Maurizio Sarri to replace him this summer.  Whilst the former-Napoli manager has seemingly identified Manolas as a transfer target, the manager situation at Stamford Bridge will surely be a discouragement to the player.

What’s more, Kostas Manolas’ latest comments will come as a blow to Chelsea.  Despite opening the door to leave Roma this summer, the centre-back did not mention Chelsea as a possible destination.

Instead, the 6’2” defender named us as one of the ‘big clubs’ he would be interested in joining, as well as the likes of Barcelona, Bayern Munich and Paris Saint-Germain.

Manolas is quoted in the Daily Star as saying:

“It’s only natural you want to play for the biggest clubs, like Barcelona, Manchester United, PSG and Bayern Munich.

“I think I could make the difference anywhere I went, even at Barcelona, although I’ve never been close to a move to the Blaugrana.”

It has been widely-reported that Jose Mourinho is in the market for a new centre-back this summer following Victor Lindelof’s failure to adjust to the Premier League last season.  The boss has seemingly never been keen on Phil Jones nor Chris Smalling as long-term fixtures in our defence.

We have been linked to a whole host of names this summer, including Tottenham Hotspur’s Toby Alderweireld, Real Madrid’s Raphael Varane and Leicester City’s Harry Maguire.

Kostas Manolas has been mentioned in recent weeks too and following this recent interview Jose may be tempted to step his interest up in the solid defender.

£32 million in today’s market would be great value for a player of Manolas’ quality.