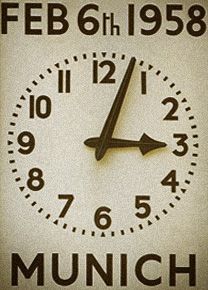 One cold and bitter Thursday in Munich, Germany,
Seven great football stalwarts conceded victory,
Seven men will never play again who met destruction there,
The flowers of English football, the flowers of Manchester

Matt Busby’s boys were flying, returning from Belgrade,
This great United family, all masters of their trade,
The pilot of the aircraft and the skipper Captain Thain,
Three times they tried to take her up and twice turned back again.

The third time down the runaway disaster followed close,
There was ice upon the wings and the aircraft never rose,
It ran upon the marshy ground, it broke, it overturned.
And seven of the team were killed when the battered aircraft burned.

Roger Byrne and Tommy Taylor who were capped for England’s side.
And Ireland’s Billy Whelan and England’s Geoff Bent died,
Mark Jones and Eddie Colman, and David Pegg also,
Before the blazing wreckage went ploughing through the snow.

The trainer, coach and secretary, and a member of the crew,
Also eight sporting journalists who with United flew,
and one of them was Big Swifty, we never will forget,
the greatest English ‘keeper who ever graced a net.

They said that Duncan Edwards had an injury to his brain,
They said that Jackie Blanchflower would never play again,
Matt Busby he was lying there, the father of the team
Six months or more did pass before he saw another game

Oh, England’s finest football team its record truly great,
its proud successes mocked by a cruel turn of fate.
Seven men will never play again, who met destruction there,
the flowers of English football, the flowers of Manchester

– The Flowers of Manchester

The official Manchester United site has an outstanding tribute lined up for everyone throughout the day. I think they have done a great job at the end of it all — AIG or no AIG — and everyone involved must be lauded for the efforts. I am sure I cannot write a post to do justice to the tragedy as it is not easy for me to write about something that happened many years before I was even born and expect to appropriately give it’s due. It’s not just United’s loss but that of English football as a whole and it is a shame that not many so-called English fans get that. Anyway, today is not a day to complain, therefore I would advise everyone to head over to Manutd.com and read the huge material on offer as well as documentaries available online for the whole day.

Here’s hoping that some idiots don’t spoil the one minute silence that is to be observed when England take on Switzerland today.